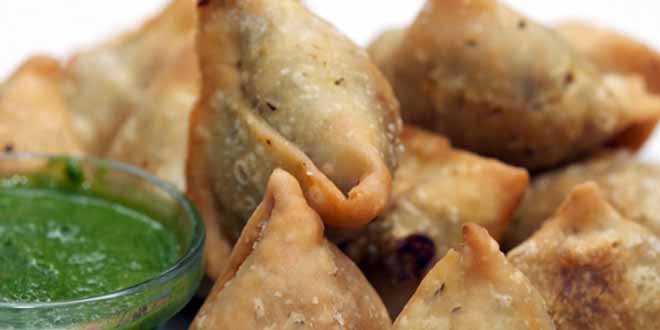 How Good is Your: Samosa

A famous Pakistani snack, samosas are a fried pastry with a savory filling. The filling can consist of spiced potatoes, ground lamb, ground beef or ground chicken. The first instance of the samosa was found in the Middle East prior to the 10th century. They were introduced to South Asia during the Muslim Delhi Sultanate dynasties when cooks from the Middle East and Central Asia migrated to work for the kitchens of the sultans.
Now that we have a small history of samosas out of the way, let’s get down to the ingredients. Here we will discuss all the filling ingredients plus the ingredients that are used to cover the filling, to make the whole samosa. We’ll discuss both the vegetarian and non-vegetarian varieties.

For this, you’ll need:

Well there you have it – two varieties of making samosas. Now let’s get into the specific ingredients.
Maida that is used to make the samosa covering is made from the starchy white part of wheat grain, while the good fibrous bran is removed during the process of. It is also usually bleached with certain chemicals to bring out the white color. Since the good bran part of the wheat is removed, maida is full of simple carbohoydrates.
Ghee is a different ingredient that is used to make the covering and another ingredient that should have its limited uses. Ghee is a type of clarified butter which is prepared by simmering the butter and removing the residue. Ghee is composed entirely of fat, 62% of which contains saturated fats!
While the above two ingredients have its negative uses, some ingredients that are used to make samosas are good for you. For example, onions contain antioxidant properties that make them protective against health conditions such as heart disease and cancer. They contain allyl sulfides which are compounds that help lower blood pressure, as well as saponins which reduce cholesterol and prevent tumors. It contains another nutrient allium which is believed to fight arthritis. Another good example is garlic. It contains allicin which is a naturally occurring antioxidant that help improve heart health. Garlic also lowers blood pressure and LDL-cholesterol levels — as well as decreases levels of homocysteine — a by-product of protein breakdown that causes inflammation and damages blood vessels.
Ginger has amazing anti-inflammatory properties. It contains compounds called gingerols which help patients fight rheumatoid arthritis. These ginergols also inhibit the growth of colorectal cancer cells.
Cardamom contains chemicals that treat stomach and intestinal spasms and gas and increases the movement of food through the intestine. It can also treat heartburn and irritable bowel syndrome as well as constipation.
Cumin seeds are an excellent source of iron, a mineral that plays many vital roles in the body such as oxygen transportation, metabolism, and a healthy immune system. It is also important for menstruating women. (For more information, Read all about Iron here).
Cayenne pepper is one of those ingredients that you should incorporate in all your cooking. Not only does it make the food tasty and spicy, it has numerous health benefits. Cayenne pepper contains capsaicin which helps fight inflammation and provides natural pain relief due to the release of endorphins. It also reduces blood cholesterol level as well as triglyceride levels. Cayenne pepper also releases beta-carotene and vitamin A, important nutrients to fight infections and boost immunity. And for all of you that are trying to lose weight, well you should use cayenne pepper as much as you can, because it has been known to promote weight loss and increase metabolism.
Turmeric powder is another example that has numerous benefits to your health. Turmeric contains curcumin which has anti-inflammatory and antioxidant properties. If you take it with black pepper, which contains piperine, the amount of curcumin that is absorbed by the body greatly doubles. Curcumin also boosts levels of a brain hormone called Brain Derived Neurotrophic Factor, which increases the growth of new neurons and fights diseases that degenerate the brain. Curcumin has beneficial effects on several factors known to play a role in heart disease.
Coriander is used for digestion problems such as upset stomach, loss of appetite, nausea, diarrhea, bowel spasms and intestinal gas.

Here’s a Tip for You

While samosas taste great, they may not be the healthiest choices for snacks, mainly because of the deep frying and the calories that go into them, especially aloo samosas; both meat and aloo samosas can yield up to 310 calories for one serving! Aloo samosas are full of carbs, while the meat samosa has more protein than carbs. But fear not, you can still enjoy a samosa during your next chai break. Instead of deep fried aloo/meat as the filling, why not opt for baked spinach (palak) samosa? Here’s how you can make this healthier version.
You’ll need:

With this kind of samosa, you are getting a more filling food with much less calories and more nutrients that spinach has to offer. And this recipe calls for light olive oil, a more healthy oil to use in cooking than vegetable oils, as well as whole wheat flour rather than the all-purpose white maida.