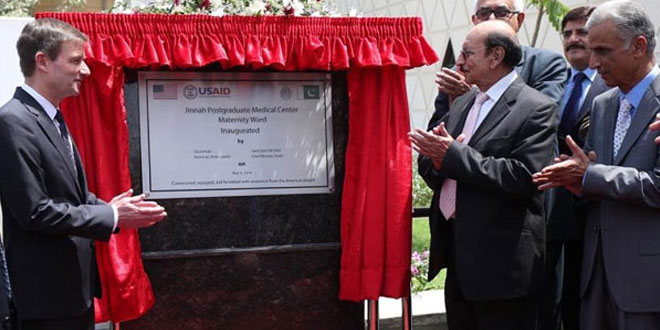 Chief Minister Sindh Syed Qaim Ali Shah recently inaugurated the maternity ward at Jinnah Postgraduate Medical Center by USAID is a gift for people of Sindh and thousands of women will avail the best maternity facilities.

The 120-beded maternity ward had been completed with cost of PKR 628 million at JPMC that was funded by U.S agency for International Development (USAID).

CM said thousands of women will avail the state-of-the-art maternity facilities at maternity ward of JPMC in near future. He applauded the role USAID in up-gradation of educational and health institutions in Sindh province.  He thanked the USAID for its support in health and education sectors.

US Ambassador David Hale said America and Pakistan have worked together for many years to solve big challenges such as improving access to high quality health care. He said these building are symbols of four abiding partnership. He said USA and Pakistan have a long history of working together to improve health care in Pakistan.

Minister for Health Jam MehtabHussainDahar thanked the USAID for its support in improvement of health facilities in Sindh province.

During the ceremony, the medical center administration also signed a memorandum of understanding (MoU) with Tabba Foundation to manage the new maternity ward.

In January 2016, Ambassador Hale and Chief Minister Sindh Syed Qaim Ali Shah inaugurated the Jacobabad Institute of Medical Sciences, also funded by USAID and now serving hundreds of patients daily. Since 2012, more than five million women and children have received health care services at a site supported by the U. S government.