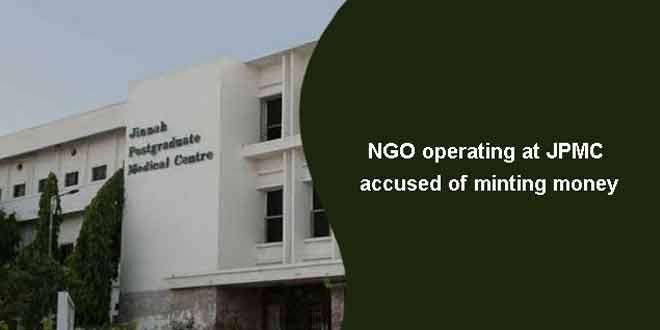 A non-governmental organization (NGO) working for Jinnah Postgraduate Medical Centre’s (JPMC) Ophthalmology department has been accused of minting money from poor patients visiting the health facility, instead of providing them relief.

An official of the hospital’s Ophthalmology department alleged that the NGO – `Care & Kindness Society’-, being run by a retired nurse of the hospital and her niece, was charging exorbitant fees/rates from poor patients visiting the hospital for the treatment of eye ailments, in general and for getting implanted intraocular lens (IOL), in particular.

Elaborating, the official said that the most common type of IOL is the pseudophakic IOL and these are implanted during cataract surgery following removing the cloudy crystalline lens (also known as cataract).

“It was surprising that an NGO operating in the hospital which collects millions of rupees from local private donors and international charity organizations for providing free treatment facilities to poor patients has evolved a novel idea for minting money,” the official added.

JPMC’s focal person Dr Jawaid Akhtar Jamali said that it was mandatory upon NGOs to provide free treatment to patients as these organizations not only avail facilities but also get funds from government and donor agencies.

He assured that stern action will be taken against staff of the NGO if found involved in minting money, instead of providing relief to poor patients.