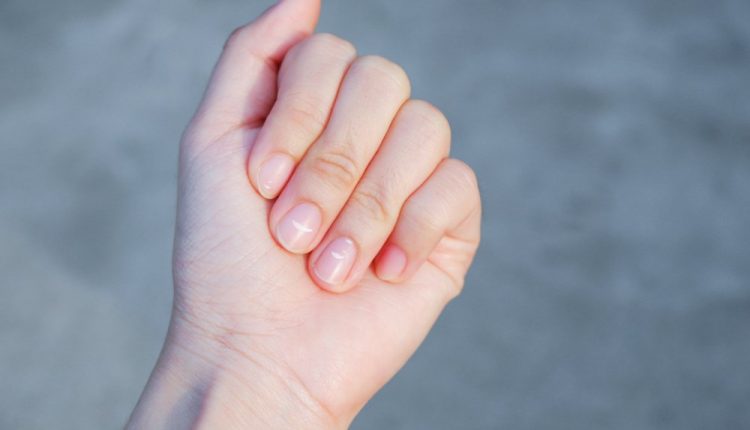 What are those White Spots on Your Nails?

How many times have you noticed those tiny white streaks and blotches on your nails? Well if you’re anything like me, than you may have wondered your entire life. I considered myself an extremely malnourished child, for there hadn’t been a time in my childhood when I didn’t have white spots on my nails. My mom would forcefully make me gulp down gallons (this may or may not be an exaggeration) of milk every day and night for she was convinced that it was due to a calcium deficiency. And why wouldn’t she? This is what we’re commonly told. But is that the only reason for it?

White spots on nails, medically referred to as leukonychia, is a condition in which there is a milky discoloration of the hard nail surface. They may appear as small streaks, cresenteric patches at the base of the nail bed or tiny scattered dots. In more severe cases they may appear as stripes or straita. In cases of liver disease and as a side effect of some drugs, the entire nail may appear white. Most of these patterns are random occurrences but in some instances they may point to a specific condition.

A very common occurrence, people will develop this at some point of their life no matter their healthy status. This is because, the most common reason for the development of white spots is the injury to the nail bed. This doesn’t have to be a painful or severe one. Even stubbing a nail against table tops or strumming guitar strings can cause these. People who frequently get manicures and pedicures will find themselves with blotchy nails more often as the pressure from a cuticle massage can cause damage to the delicate nail bed. Wearing acrylic nails or allergic reactions to certain nail paints can also cause microscopic pressure injuries to the nails. Zinc and calcium deficiencies in the body can manifest in the form of blotchy and brittle nails.

Although not as common as the afore mentioned reasons, one cause of leukonychia can be fungal infections. But the good news is that, the white spots appear so late in the disease that the infection would probably have resolved by then. Heart disease, renal, or kidney failure, psoriasis or eczema, pneumonia, arsenic poisoning are some of the other, severe causes of indirect leukonychia.

Treatment for this is on the basis of what is the offending agent to the body. This is a great indicator of the goings of the inside of our body and can help in an early diagnosis if you’re observant enough. If you’re worried about what might be causing white spots to appear on your nails there are several tests that can help you reach a diagnosis.

Once a diagnosis is made and the underlying condition treated, the spots will disappear over time. Even without a severe cause most white spots go away eventually and are no cause of alarm. But like in most cases, prevention is better than cure. To prevent white spots from occurring on your nails, you should have a balanced nutritious diet that aid in healthy nail growth. Keeping your nails short will decrease the number of silent injuries to the nail bed. Keeping away from nail paints and acrylic nails can also aid in this. You may also apply cuticle creams or oils that help moisturize and nourish your nail beds.