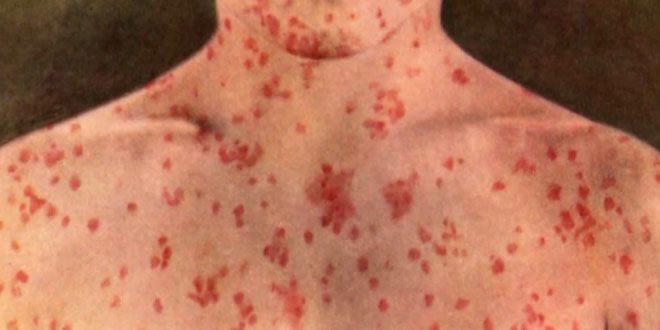 The menace of measles

Measles is a contagious disease characterized by fever and a red rash, and typically occurs in childhood. Once globally prevalent, measles is now easily controlled by vaccination.

Also known as rubeola, measles still contributes to about 100,000 deaths, mostly in children under the age of five.

HOW MANY TYPES OF MEASLES ARE THERE?

There are two types of measles, caused by different viruses.

Red measles are caused by the rubeola virus. They are also known as ‘hard measles’ or simply as ‘measles.’ Most of the time, recovery is quick and without complications. Severe complications such as encephalitis and pneumonia are seen in a few cases.

The second type of measles is the ‘German measles.’ Also known as the ‘three-day measles,’ this type is caused by a different virus, the rubella virus. Although this is a less severe measles causing virus, it can cause significant birth defects if passed by a pregnant female to the fetus.

WHAT ARE THE SIGNS AND SYMPTOMS?

Known as the incubation period, signs and symptoms of measles start appearing approximately 10 days after being infected with the rubeola virus. This is the period during which the virus multiplies.

Initial (early) symptoms include fever and runny nose. The patient may also present with red eyes (conjunctivitis), cough and an overall lethargic or run-down feeling.

After about two to four days after these initial symptoms, the characteristic red splotchy rash takes over the body from head to toe. It appears first on the face spreading to the trunk, finally affecting the arms and legs. The rash is red in color with a round shape. Adjacent rash spots blend into each other as more and more appear. From a distance, the rash appears uniformly red. Further signs include ‘koplik spots.’ These are grayish spots present inside the cheeks in people with measles.

The rash is usually not itchy. Once it starts to leave, the skin may shed.

In case of German measles, the symptoms are milder. Swollen and tender lymph nodes (important in the function of the immune system, and swell and become visible during infections) may also be palpable in the back of the neck. Symptoms are so mild that they may even be unnoticeable. They also resolve much quicker.

HOW DO MEASLES SPREAD?

Measles are highly contagious – the virus lives in the mucosa of the nose and throat. Therefore, it can be easily spread though sneezing and coughing. Another point of importance is that measles virus can live up to two hours in airspace where the infected person has coughed or sneezed. Naturally, if a person breathes in the air, or touches the infected surface and then touch their eyes, nose or mouths, they can be easily infected.

Measles is strictly a disease of humans and do not spread via animal species.

WHO IS AT RISK?

The following people are at risk of contracting the disease:

HOW CAN WE PREVENT AND TREAT MEASLES?

To reduce mass global death from measles, key public health strategies – routine measles vaccination for children combined with awareness campaigns – are central to the worldwide prevention of the virus. The vaccine has been in use for more than 50 years and has markedly reduced measles-related mortality numbers.

However, no specific anti-viral treatment for measles exists.

Treatment exists only at the level of management of symptoms and prevention of further complication. Diarrhea and vomiting caused by the disease is treated with fluid replacement and restoration of electrolytes important for mineral balance in the body’s cells. Antibiotics are prescribed in cases of eye or ear infection and pneumonia.