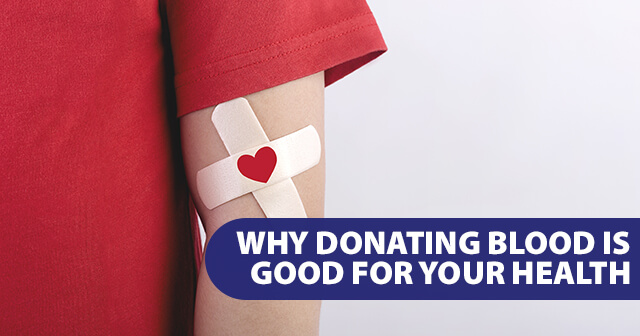 Why Donating Blood Is Good For You And Others

Every year, June 14 is observed as the World Blood Donor Day to create awareness about the need for safe blood transfusion and to thank donors for their lifesaving gift. However, in Pakistan not many donate blood.

According to the National Coordinator Safe Blood Transfusion Program (SBTP) – Ministry of Health, Hasan Abbas Zaheer, blood requirements of any country can be met if one or two percent of the public donates blood.

“Since Pakistan has an additional high burden of thalassemia, the country’s 3% of the population should donate blood,” he mentions.

In order to meet the blood requirement in Pakistan, Facebook launched its blood donation feature in the country last year. The feature allows people to sign up as blood donors and locate their nearest blood donation centers. Those in urgent need for blood can sign up as well.

Since 2018, more than two million people have signed up to be blood donors on Facebook in Pakistan. However, Zaheer says though this feature is quite useful and free of charge it doesn’t have the required impact.

“Signing up is easy but it won’t make any difference as it is difficult to figure out how many people donated blood,” he explains.

However, the SBTP is working on a pilot project and contacting all blood banks across the country from where it can identify donors. “The FB feature will have an impact when we will have the data of donors,” adds Zaheer.

There is a wrong perception that donating blood has side effects, such as, weakness. In fact, it has many advantages.

Thirty-four-year-old Ashik Hussain had been donating blood since he was in his early 20s. But he was diagnosed with Hepatitis B eight years ago, the last time he went to donate blood.

“The last time I donated blood for my brother’s mother-in-law who had cancer, I had a phone call from the hospital. They informed me I have Hepatitis B and I should start my treatment soon. They also warned me to not donate blood anymore,” he shares.

If it wasn’t for blood donation, Hussain wouldn’t have known what he was suffering from. And that is one of the benefits of being a blood donor.

Related: 5 Things To Know Before You Donate Blood

According to Dr Mamoona Shafiq, associate professor of physiology at the Islamabad Medical and Dental College, most people are unaware of their health issues and a lot of them only find out after their blood is tested before donation. “Many are diagnosed with Hepatitis B, C or HIV,” she adds.

She goes on to elaborate that another benefit is that iron level reduces in the body when we donate blood. After a person donates blood, blood count reduces and production of new red cells starts, which is good for leading a healthy life.

According to Dr Shafiq, blood donation is one of the ways to reduce stress levels as well. A person feels happy because it is an act of generosity, having a positive psychological effect.

Twenty-seven-year-old Komal Anwer, a lawyer by profession, says she started donating blood two years ago. She recalls one of her friends posted on a social media platform that her uncle needed A+ blood urgently in a private hospital. “It was 1am and I at once decided that I am going to donate blood to save someone’s life. I was happy to be of help to a stranger because it was a completely selfless act,” mentions Anwer.

Similarly, Syed Safdar Abbas, 26, who started donating blood five years ago, says he sees it as a charity. Discussing the physical and mental state after donating blood, Abbas says he never felt weakness or any other issues rather the act made him feel great and generous.

Young Doctors Association Pakistan Secretary General Dr Salman Kazmi says there is a need to encourage more young people to donate blood as it has multiple health benefits. To achieve this, the SBTP envisions to make healthy donors their regular donors. Under it, they carry out campaigns at colleges and universities to mobilize young people.

Only those should be discouraged who have prior health issues, such as, iron deficiency, low hemoglobin level or if their weight is less than 110lbs, mentions Dr Shafiq.