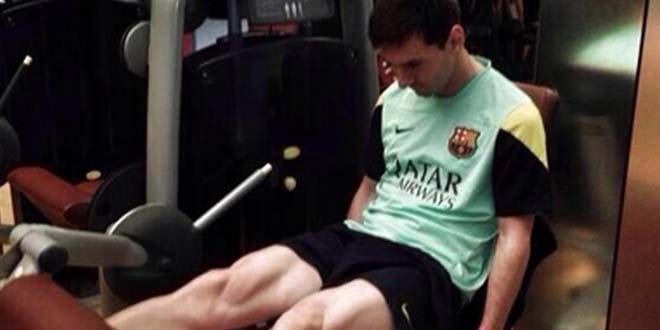 Dubbed as the greatest footballer of all time, Lionel Messi is one of the best players who have graced the beautiful game of football. His predator like instinct to score, his ability to go pass players, his honest and modest behavior and most of all his love for the game makes him what he is today.

Lionel Messi started playing his football at a very tender age in his native country of Argentina. At the age of 11, he was diagnosed with a growth-hormone syndrome  but this disability was a minor speed bump in his life. His talent was spotted by Spanish La Liga outfit FC Barcelona and as they say the rest is history.

Breaking records for Messi is like a walk in the park. He is a  four-time Balon D’Or award (World Player Of The Year Award) winner, which is the most by any footballer in the history of the game. He also has the record of scoring the most goals in a single season (91 goals). He recently became FC Barcelona’s all time leading goal scorer with 425 goals and he is still going strong.

Aged 27, standing at 1.69 meters (5 ft 7 inches) the Argentine maestro has the world at his feet, literally. He also has signed different deals with sports sponsors like Gatorade, Adidas, Samsung showing his activity off the field.

The question now is how does Messi perform so well whenever he sets foot on the football pitch? How is he so consistent? What is that X-factor that segregates him from the rest? The answer to all those questions are Lionel Messi’s desire to be the best. And when it comes to fitness and diet management he leaves no stones unturned.

The Argentine player  follows a very strict regime of both diet and workout. Here we’ll try to breakdown what Lionel Messi does for his training.

Lionel Messi, under the supervision of his coaches follows a very strict regime when it comes to training. His training sessions are divided into two in which he undergoes different football related drills which makes him ready for the game.

In this workout, he concentrates more on building speed. His workout is divided into different sections in which he performs different exercises. For basic movement he practices the pillar bridge-front, lunges, hamstring stretches, pillar skips. While in Plyometrics he uses the Hurdle hop and split squats for strengthening his core and leg muscles. To end this workout, he does different acceleration drills for increasing his pace.

In this training circuit, Messi uses the exercises of pillar skips, skipping rope, squats for building his leg muscles. For agility, he perfects his lateral movements by skipping past diagonal hurdles, cones and what not. In the end of the rigorous workout, he hydrates himself to replenish his body and then jogs for a period of five to ten minutes to cool down.

So that was a brief insight on Messi’s training regime, lets see what he eats to keep himself in shape.

Messi’s meal plan is divided into time frames which keep him motivated before playing a competitive match.

Messi follows a strict high protein-low carb diet. In this diet, he incorporates protein through different sources may it be chicken, beef or protein shakes. He also keeps a check on hydrating himself by drinking atleast two litres of water everyday.

5 days before a match

Messi prepares himself by keeping the match day in mind. Five days before a game, he follows the above mentioned regime along with vegetable soups. The soups are comprised of ingredients like turmeric, coriander, chilli and many other vegetables which increase blood flow inside the body.

One day before a game

As the game comes closer, Messi avoids heavy foods. He takes protein in the form of fish, prawns, chicken as protein. Boiled potatoes and some green vegetables are also a part of his afternoon meals.

6 hours before a game

It is important to give rest to your body before a game and Messi follows that rule. He invests these hours in his sleep to get his energy to perform at the highest stage. But if he doesn’t rest, he takes meals which provide him with instant energy like porridge or egg whites.

90 minutes before a game

Before the game, Messi eats fruits like banana, apples or mangoes which provide him with all the essential elements and minerals he needs to last in a gruesome football game in adverse or favourable conditions.