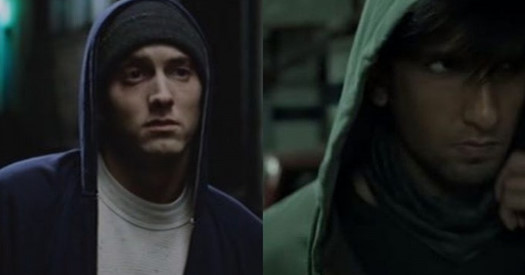 The resemblance is uncanny!

Bollywood maybe the most thriving film industry in the world but the truth cannot be denied that they often get a little more than just inspired by Hollywood movies. There have been times when their movies have been complete rip offs of famous Hollywood flicks. Ranveer Singh and Alia Bhatt starrer Gully Boy all set to release next month is another example of perhaps accidental resemblance (ahem ahem!) to a Hollywood flick starring rap star Eminem – 8 Mile.

ALSO READ: Tweets About NickYanka, DeepVeer And Ambani Weddings That Made Us LOL!

Ever since the trailer surfaced, people have been talking about this movie and its striking resemblance to Eminem’s movie ‘8 Mile’ that charts his own journey in the music industry and ups and downs in life. There were many scenes that gave us serious Eminem vibes and you’ve definitely not been paying attention if the song ‘Apna Time Aayega’ doesn’t remind you of ‘Lose Yourself’ by Eminem and the rap battle scenes. NOT A COINCIDENCE!

It’s not just us though, there are others who saw the similarities and a number of memes/mashups sprouted on the internet.

Cast of the movie includes Ranveer Singh, Alia Bhatt, Kalki Koechlin and other notable names from Bollywood. While Ranveer’s cinematic presence makes us look forward to his individual performance, but at the same time it begs the question: Has Bollywood ran out of ideas and whatever happened to originality?

Will Koffee With Karan’s Season Finale Be It’s Saving Grace?