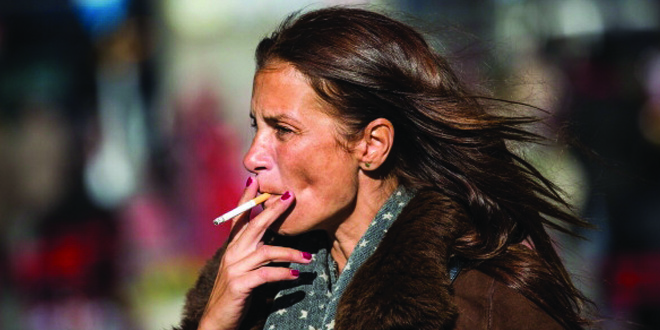 A US study has found that both active and passive smoking is linked to infertility problems and early menopause in women.

The study looked at a total of 93,676 women across 40 different centres in the US, who were all part of the Women’s Health Initiative Observational Study (WHI OS) between 1993 and 1998.

All of the women were between 50 and 79 years old and had already gone through menopause.

Those who smoked, or used to smoke, were asked how many cigarettes they smoked or had smoked daily, the age they had started smoking, and for how many years they had smoked.

Those who had never smoked were asked if, and for how long, they had lived with a smoker or had worked where someone smoked in the workplace.

After taking into account other lifestyle factors, the results showed that tobacco exposure through both active and passive smoking can hasten the natural menopause to occur before age 50 and can cause fertility problems.

And from the women who had the highest level of tobacco exposure, those who had started smoking before the age of 15 experienced the onset of menopause nearly 22 months earlier.

Those who smoked more than 25 cigarettes a day experienced the arrival of menopause 18 months earlier.

In addition, these women were 18% more likely to have had infertility problems than women who had never been exposed to passive smoking.

Commenting on the results, the researchers suggested that the results could be due to the toxins in tobacco smoke, which are known to have harmful effects on hormones and reproduction.

“This is one of the first studies of this size and statistical power to investigate and quantify active and passive smoking and women’s health issues. It strengthens the current evidence that all women need to be protected from active and passive tobacco smoke.”

The results were published online in the journal Tobacco Control.

Early menopause ‘may speed up aging’

Solving the evolutionary puzzle of menopause

Cupping Therapy – Is it worth it?