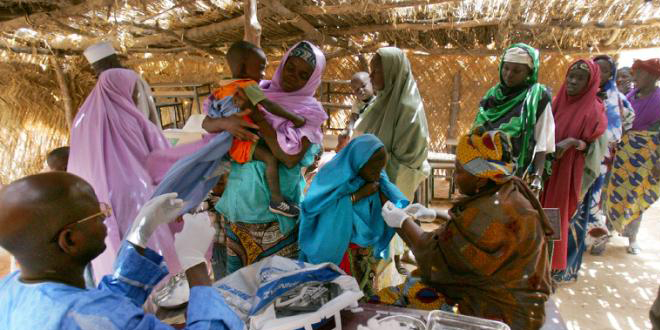 WHO urges routine meningitis vaccine to avoid resurgence in Africa

Meningitis A has almost been eradicated in Africa but could stage a “catastrophic” comeback if countries fail to include a groundbreaking vaccine in routine immunisation, the World Health Organization (WHO) warned Tuesday.

Immunisation campaigns using the landmark MenAfriVac vaccine began five years ago in Africa’s so-called meningitis belt, which stretches across the continent from Senegal to Ethiopia.

Today, the disease has all but been wiped out in this zone, constituting a “stunning success”, WHO said.

But it also pointed to a modelling study showing that if immunisation stopped after large one-off vaccination campaigns, countries could expect “catastrophic resurgences” by 2030.

“Our dramatic gains against meningitis A through mass vaccination campaigns will be jeopardised unless countries maintain a high level of protection by incorporating the meningitis A vaccine into their routine childhood immunisation schedules,” the agency’s vaccine chief, Jean-Marie Okwo-Bele, said in a statement.

MenAfriVac was developed in response to a plea from African health ministers after a meningitis A outbreak in 1996 infected more than 250,000 people, killing more than 25,000 in just a few months.

Since 2010, the Meningitis Vaccine Project — a partnership between WHO and US non-profit PATH and funded by the Bill &amp; Melinda Gates Foundation — has helped vaccinate more than 237 million people aged one through 29 in 16 of the 26 countries in the belt.

By 2013, there were only four laboratory-confirmed cases of meningitis A reported across the 26 countries, WHO said.

The Meningitis Vaccine Project, which ended last December, “was extremely successful”, WHO’s Marie-Pierre Preziosi, a member of the team that developed the vaccine, told reporters Tuesday.

But she added that “we have been a victim of our own success.”

With virtually no cases left, countries could easily be tempted to turn their attention elsewhere, she said, insisting though that “it is very important for them to keep this high on their agenda.”

Without action, “we will have a dramatic resurgence of these epidemics in about 10-15 years,” Preziosi said.

Meningitis — an inflammation of the lining around the brain and spinal cord — is a potentially fatal disease that can cause death or severe brain damage within hours.

It is usually bacterial or viral and occasionally is due to fungal infections.

The A variant of the disease is responsible for between 80 and 85 percent of all cases in Africa.

A meningitis outbreak earlier this year that killed more than 400 people in Niger was meanwhile attributed to the C and W variants of the disease, WHO said.