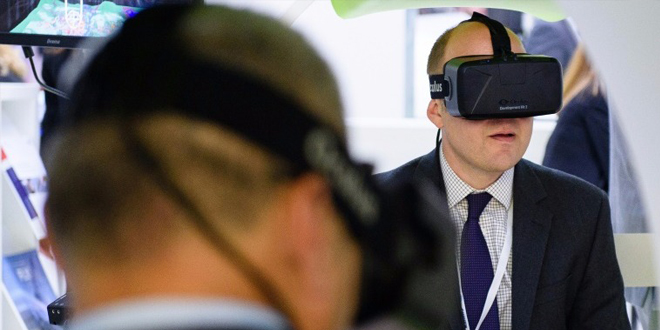 Virtual reality is a dream of video games lovers, but it is poised to blast far beyond play to education, medicine, architecture and other learning arenas.

Some developers, however, are intent on putting virtual reality headsets to more productive uses than gaming.

Andrew Tschesnok, founder and chief executive of Organic Motion, sees the target market as including anyone who uses video, from YouTube bloggers to CNN.

Organic Motion bills itself as the world’s first real-time virtual reality content creation studio and was among the innovative companies focused on the topic at a TechCrunch Disrupt startup conference in San Francisco this week.

The Organic Motion device uses a ring of cameras to capture images of people in 3D and integrate the characters live into virtual reality video.

When Facebook bought Oculus last year in a deal valued at $2 billion, it touted virtual reality as the next major computing platform, allowing friends a means to visit one another no matter how far.

Oculus and Sony have already unabashedly courted video game makers, with virtual reality being a major theme at the Electronic Entertainment Expo in Los Angeles in June.

But the Disrupt conference took the technology a step beyond gaming, with startups such as VRChat, whose software lets people use Oculus Rift to get together in virtual worlds for conversations.

The software creates a playful universe with customizable avatars in a style reminiscent of Manga, a demonstration showed.

The company’s technology was used last year in one of the first university courses in virtual reality experiences in Canada.

Remi Rousseau, co-founder of two startups linked to virtual reality, said the technology was “full of social applications,” allowing people to see real representations of one another, not just avatars.

He described the technology as a sort of “Skype 3D.”

His Franco-Belgian company Mimesys is testing a device that allows two people equipped with headsets to get together at a table in a virtual meeting room.

His second startup, Surgevry, developed virtual reality camera gear that can be worn on surgeons’ heads during operations.

Virtual reality video captured that way has already resulted in sales, mainly to medical equipment suppliers who use it to show the right way to use their products.

Real estate is also seen as fertile ground for virtual reality. Startup InsiteVR created an online service that lets architects or interior designers transport people into projects to see them from the inside.

The service is available on-demand or by subscription and has 30 customers, according to co-founder Angel Say.

InsiteVR charges about $200 for the virtual equivalent of a one-bedroom apartment, Say said.

Research company Tractica recently estimated that global revenue related to virtual reality gear and content has the potential to reach $21.8 billion by 2020, with a huge chunk of that resulting from professional uses.

However the market remains far from critical mass.

While virtual reality is a hot topic, there are not a lot of sales for now, Rousseau said.

That sentiment was shared by Canada-based Retinad, which was in San Francisco showcasing software that can collect usage statistics on virtual reality applications, with the potential to distribute advertising in faux worlds.

Beverage giant Coca-Cola has started some testing, but “there are not enough players in the market to justify that big brands are starting to advertise,” said Retinad co-founder Samuel Poirier.