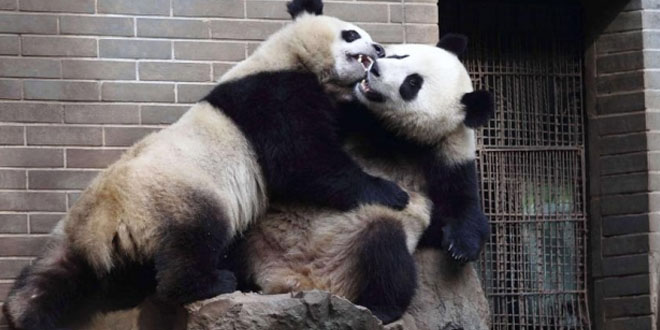 US zoo pandas get $4.5 million gift

An American benefactor has donated $4.5 million for the giant panda conservation program at the US National Zoo, where twin cubs were born last month.

David Rubenstein, a co-chief executive of the Carlyle Group asset management firm, pledged to fund the Washington-based program through 2020.

The zoo is home to female giant panda Mei Xiang, adult male Tian Tian, female two-year-old Bao Bao and an unnamed male cub born on August 22. His twin died of pneumonia within a week of birth.

“The National Zoo’s panda program has been a remarkable success — two healthy pandas in just two years — and I am pleased to support it for another five years,” Rubenstein said in statement issued by the zoo.

The zoo’s panda habitat — its star attraction — is named after the Rubenstein family in recognition of a previous donation to the program made in 2011.

Eleven conservation biologists have also been awarded fellowships funded by Rubenstein to study pandas in the United States and China.

A twitter account set up in honor of the newborn panda cub reacted gleefully to the news.

A member of the zoo-owning Smithsonian Institution’s Board of Regents since 2009, Rubenstein has given a total of $9 million for panda research and another $2 million in 2013 for Asian elephant research.