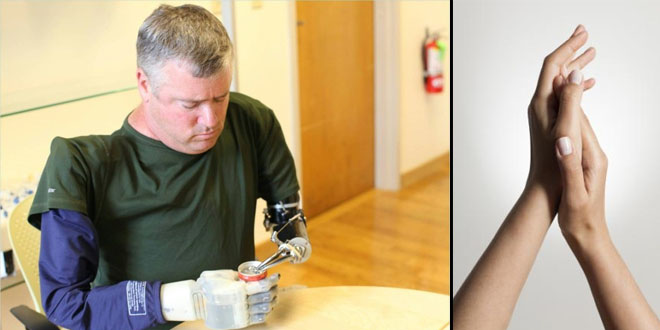 US military develops prosthetic hand that can ‘feel’

Researchers fitted a man who has been paralyzed for more than a decade with an experimental prosthetic hand that lets him “feel” sensations, the US military’s futuristic development department said.

Scientists wired electrodes into the 28-year-old patient’s sensory cortex, which is the part of the brain that identifies tactile sensations, enabling him to perceive a basic sense of touch.

In the first series of tests, researchers gently touched each finger of the prosthetic hand while the man was wearing a blindfold.

He was able to state with nearly 100-percent accuracy which finger was being touched, the Defense Advanced Research Projects Agency, better known as DARPA, said in a statement Friday.

“At one point, instead of pressing one finger, the team decided to press two without telling him,” said Justin Sanchez, who heads DARPA’s Revolutionizing Prosthetics program.

“He responded in jest, asking whether somebody was trying to play a trick on him. That is when we knew that the feelings he was perceiving through the robotic hand were near-natural.”

Researchers also sent wires from the man’s motor cortex to the hand, so he was able to control its movements with his thoughts. The mechanical hand was developed by the Applied Physics Laboratory (APL) at Johns Hopkins University.

It’s the sort of technology that until recently was imaginable only in science fiction — like the scene from the 1980 classic movie “The Empire Strikes Back,” where Luke Skywalker gets a prosthetic hand after losing his own in a lightsaber dual with Darth Vader.

But DARPA says new advances made possible by neural technologies it is developing point to a future “in which people living with paralyzed or missing limbs will not only be able to manipulate objects by sending signals from their brain to robotic devices, but also be able to sense precisely what those devices are touching.”

DARPA did not release the identity of the volunteer in this study, and said only that he had suffered a spinal cord injury.

“By wiring a sense of touch from a mechanical hand directly into the brain, this work shows the potential for seamless bio-technological restoration of near-natural function,” Sanchez said.

The study has been submitted for peer review and eventual publication in a science journal.