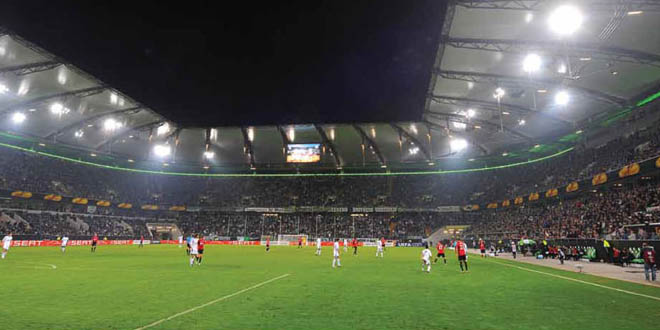 A total of 52 goals were scored in Match Day 2 of the UEFA Champions League. Important wins were secured by the two Manchester clubs from England, whilst the other two clubs (Arsenal and Chelsea) didn’t get any fruitful results from their matches.

Teams from Group E, F, G and H were in action on Tuesday, whilst the teams from the remaining four groups played on Wednesday.

French outfit Paris Saint Germain scored three goals past Ukranian side Shakhtar Donekst which resulted in a comfortable victory for Laurent Blanc’s team. Serge Aurier and David Luiz scored in first half, whilst an own-goal from Srna made matters worse for the home side.

A five goal thriller was experienced between Russian side CSKA Moscow and Dutch outfit PSV Eindhoven. Both of the teams started with good pace but the side from Russia opened the scoring. Musa and a brace from Doumbia was enough. Lestienne scored a brace for the visitors but in the end, it wasn’t enough. Final score was CSKA Moscow 3-2 PSV Eindhoven.

Manchester United recorded the first win of their CL campaign as they beat German side FC Wolfsburg 2-1 in an end to end game. Wolfsburg scored as early as the fourth minute, as Italian winger Cagiliuri opened the deadlock. The homeside created a few chances in the first half but they didn’t prove to be fruitful. Juan Mata equalized for United as he struck a penalty in the 34th minute. The Spaniard provided an assist to Chris Smalling’s crucial goal. Final score at Old Trafford was Manchester United 2-1 FC Wolfsburg.

Astana and Galatasaray share points at the Astana Stadium on Match Day 2. Final score was 2-2 between the two sides.

Goals from Nico Gaitan and Guedes ensured Portuguese side Benfica’s victory over Diego Simeone’s Ateletico Madrid. Correa scored the only goal for the Spanish side, the assist to which was provided Antoinne Greizman. Final score at the Vicente Calderon was Atletico Madrid 1-2 Benfica.

Manchester City bagged in all three points as they beat German side Borrusia Monchengladbach 1-2 away from home. The Argentine duo of Nicolas Otamendi and Sergio Aguero were on the score-sheet for the Citizens.

Sergi Roberto initiated and Luis Suarez finished the comeback for FC Barcelona as they beat German side Bayer Leverkusen 2-1 at the Camp Nou. Leverkusen led the game for 80 minute, courtesy of K. Papadopoulos but luck wasn’t in their favor.

The surprise package, which is BATE Borisov scored three and secured all three points against Italian juggernauts AS Roma. Stasevich, Volodko and Mladenovic scored for the home side. Gervinho and Torosidis were the goal scorers for AS Roma respectively.

Pep Giordiola’s Bayern Munich displayed a five star show as they put five past Dinamo Zagreb. Robert Lewandowski scored a hat-trick, whilst Mario Gotze and Douglas Costa scored one goal each. Beating their opponents quite comprehensively, Bayern move to the top of the table.

Olympiakos produced a shock upset as they beat English side Arsenal 2-3 to secure a win at the Emirates Stadium. Pardo opened the scoring for the visitors in the 33rd minute. David Ospina’s own goal and Finnbogason goals helped the Greek side in their endeavors. Theo Walcott and Alexis Sanchez scored for Arsenal. Final score was Arsenal 2-3 Olympiakos.

FC Porto secured a crucial victory against Chelsea FC as they beat the English champions 2-1. Andre Andre and Maxi Perriera scored one goal each which was enough for the Portuguese side to bag all three points.

Yarmolenko and Moraes scored in the 4th and 50th minute respectively to secure all three points for Dynamo Kyiv against Maccabi TA.

Russian side Zenit St Petersburg defeated Gent 2-1 at the Petrovsky Stadium. Dzyuba and Shatov scored for Andre Villas Boas’ side, whilst Matton scored one for Gent. Valencia grabbed a crucial away win at Lyon as Feghouli scored the only goal of the game, which resulted in all three points for the Spanish side. Final score Lyon 0-1 Valencia