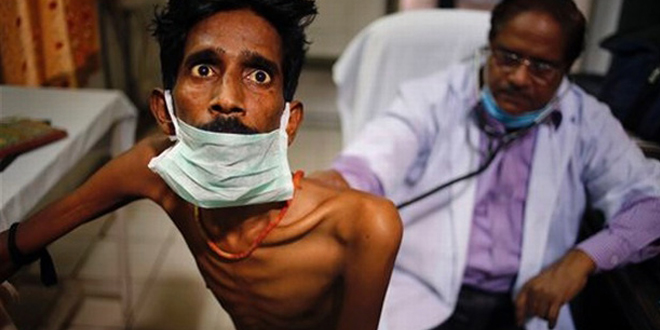 Tuberculosis kills 4,400 people daily, a number that remains “unacceptably high,” said a World Health Organization report Wednesday that ranked TB alongside HIV as a leading cause of death globally.

The disease killed 1.5 million people last year, despite big strides in treatment and prevention over the past 25 years, said the UN health agency’s Global Tuberculosis Report 2015.

The spread of drug-resistant strains of TB is a key concern, combined with the need for new drug treatments and better access to care for those in need, said the report released in the US capital.

“The number of TB deaths is unacceptably high: with a timely diagnosis and correct treatment, almost all people with TB can be cured,” said the report.

“To reduce this burden, detection and treatment gaps must be addressed, funding gaps closed and new tools developed.”

Across the planet, 9.6 million people were sickened with TB last year, and 12 percent of those new cases were HIV-positive.

More than half of the world’s TB cases were in China, India, Indonesia, Nigeria and Pakistan.

Tuberculosis is a disease caused by a bacterium, called Mycobacterium tuberculosis, which typically attacks the lungs but can also affect the kidney, spine and brain.

TB is considered one of the world’s deadliest diseases.

The overall number of cases diagnosed in 2014 was higher than in prior years, but was due to improved detection, not an actual increase in cases, the report said.

Some 3.3 percent of cases involve multidrug-resistant TB, a level that has remained unchanged in recent years, the report said.

“When it comes to the deadlier forms of the disease –- such as multidrug-resistant TB -– the news is particularly bleak,” said Grania Brigden, interim medical director of Doctors Without Borders (Medecins Sans Frontieres) Access Campaign.

“We’re losing ground in the battle to control drug-resistant forms of TB, and without considerable corrective action, the vast majority of people with MDR-TB won’t ever be diagnosed, put on treatment, or cured.”

Global health authorities acknowledged that big hurdles remain, despite a mortality rate that has fallen 47 percent since 1990.

Most of this progress was made since 2000, when the United Nations set its Millenium Development Goals, the report said.

In all, medical intervention has been able to save 43 million lives in the past 15 years, and the prevalence of TB has gone down 18 percent in that time span.

The UN’s goal to halt and reverse TB incidence “has been achieved on a worldwide basis, in each of the six WHO regions and in 16 of the 22 high-burden countries that collectively account for 80 percent of TB cases,” the report said.

“I am humbled by the progress in terms of impact and operations that we have witnessed in many countries over two decades,” said Mario Raviglione, director of the Global TB Program.

“Despite the gains, the progress made against TB is far from sufficient,” he added.

“We are still facing a burden of 4,400 people dying every day, which is unacceptable in an era when you can diagnose and cure nearly every person with TB.”

Today, southeast Asia and the Western Pacific account for 63 percent of new and relapsed cases around the world.

Health authorities are critically short on cash for TB, and the WHO report said the funding gap for 2015 amounted to $1.4 billion.

“These advances are heartening, but if the world is to end this epidemic, it needs to scale up services and, critically, invest in research,” said WHO Director-General Margaret Chan.

Substance abuse and tuberculosis in Pakistan