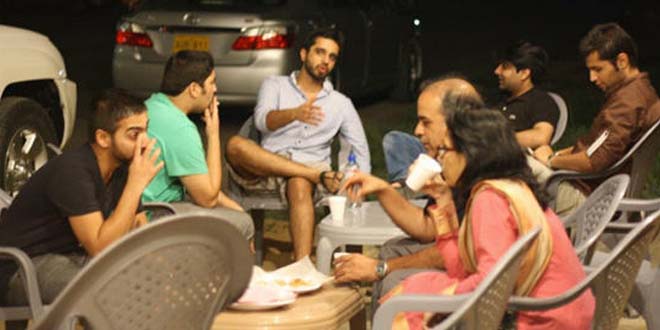 The new culture of elite dhabas in Karachi

Do you ever feel the craving to add some “tarka” to a regular tea that you drink but you are too lazy to make it on your own? If yes, then crashing at a dhaba would be the best option for you. And it doesn’t matter if you are a guy or a girl; the new dhaba trend is inclusive for all!

Dhaba, which could be defined as a roadside café, has its roots from Punjab. My grandmother once told to me that according to many fables, it was the Punjabis who sowed the seeds of dhabas wherever they went, thereby marking their culture everywhere. As the number of emigrants from Punjab increased, so did the number of such roadside cafes to satisfy their needs and remind them of their typical Punjabi food.

However, what was previously just confined to highways to serve Punjabi truck drivers, has stirred a trend as a consequence of which dhabas have become more ubiquitous than ever. With the introduction of “upscale” dhabas in the city, now the elites of Karachi also visit these cafes – more religiously than ever.

Keeping aside the popular dhaabay ki chai and other food items, what truly makes these new dhabas unique is the diversity they offer, by highlighting all the different hues that this city encompasses. You can find a laborer and a rich man sitting at the same place, drinking the same tea, having the same parathas, and for a few minutes, all the difference between them seems to evaporate. That, for me, is the true essence of the dhaba culture – bringing different people together and diminishing their differences.

Aside from this, the environment of the dhaba puts you at an eternal ease. You can conveniently put your legs in a crossed-over fashion on the chair without having to worry about who is thinking what. If you’re lucky enough to find an empty “chaarpaai” (bedstead) then kudos to your stars! On a chilly winter night, the cold breeze of Karachi in contrast to the hot tea makes out a dazzling combination; so don’t be taken aback if the entire place is engaged by shawl-draped youngsters sipping on their tea!

Now, coming to the food items, a dhaba serves it all – from breakfast to lunch to dinner. Its flaky, crunchy parathas combined with the temptingly aromatic and, of course, “karak” chai is why its most frequently visited. The recipes used to make these items are all very traditional; for instance, the Kashmiri tea is made just the same way as one would find in a Kashmiri household. No additions or subtractions. The parathas they prepare come along with many different toppings and fillings. They could either be topped with Nutella to make it a heavenly joy or filled with desi masala and cheese to give the hint of a pizza. Other than these, various vegetarian and non-vegetarian dishes comprising of chicken karhayi, lentils, rice, mixed vegetables tarkari and beef/lamb are also served to name a few.

Amongst the chilled beverages, it would be unfair not to mention the traditional Punjabi drink – the cream-topped lassi! It is served in all its Punjabi grandeur.

Dhabas provide meals at a very economical rate which makes people of all classes able enough to afford them. A cup of dhoodh-patti would cost Rs40 and its duo with paratha would cost no more than Rs70. Secondly, this also means more job opportunities for those boys who haven’t been educated at all as hotels would require at least matriculation. Furthermore, the milieu would bring anyone to be their true enjoyable self as the atmosphere is very carefree. Lastly, they have been preserving the cultural and traditional ways of Punjabis since yesteryears unlike many new introductions in the town that rather degrade the culture of Pakistan.

Currently the most famous dhaba amongst the elite is indeed Chai Wala at Khayaban-e-Bukhari. Its unique Cadbury Chai is for sure worth a try. Its stingy lemonade would take you on a roller coaster of tanginess and its pizza paratha would want you to dive into that pool of cheese.

All in all, it’s not wrong to say that visiting dhabas by people of all age is so common now that they are rightly termed as the new Dolmen Mall – where you would always run into someone or the other.