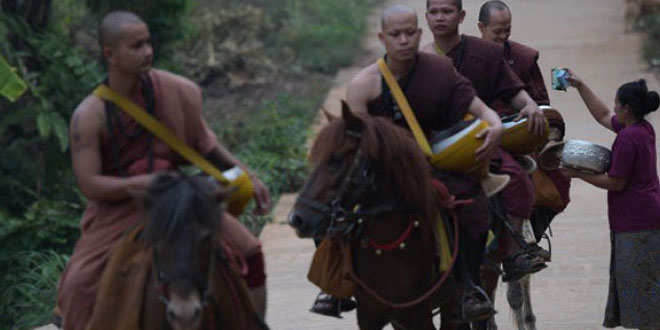 Every morning in Thailand’s far north, a convoy of orange-robed Buddhist monks and novices riding on horseback leave their mountain-top temple in the kingdom’s notorious Golden Triangle region to collect alms.

At first glance these equestrian ascetics look like a throwback to a forgotten era — but they are in fact part of an innovative drive to help young boys in this drug-ravaged region escape addiction through horses, Thai boxing and meditation.

Once famed for its opium and heroin, the main substance manufactured and trafficked through the Golden Triangle — and the main source if addiction in the area — is now methamphetamine.

“I barely had food to eat because my dad was a drug addict and didn’t work,” said Ponsakorn Mayer, know by his nickname Tawan, one of the novices who rides along the steep slopes surrounding the monastery every day.

Like many young boys in this mountainous region where rampant drug-trafficking has decimated successive generations, Tawan sought refuge at the “Temple of the Golden Horse”.

Perched on a lush, green mountain in the kingdom’s northernmost Chiang Rai province, the temple sits in the heart of the so-called Golden Triangle — an area comprising parts of northern Thailand and neighbouring Myanmar and Laos.

The temple’s monks have become social workers of a sort in the isolated region where few government services reach.

With a Thai boxing champion to provide instruction and a stable of horses to be cared for and exercised, the monastery aims to stimulate the young boys who come from local families hit by drug addiction, alongside the more mainstream classes provided by the temple.

“Without this temple, I wouldn’t have seen how vibrant life can be… my small village is full of drug problems,” said 19-year-old Tawan.

The majority of novices, who often suffer from malnutrition when they arrive at the temple, are orphans or were abandoned there by their drug-taking parents.

“Hill tribe people have tough lives, it’s partly why they often take drugs and struggle to care for their kids,” said Pra Sutipong, the principal monk at the temple.

The United Nations Office on Drugs and Crime (UNODC) estimates that each year in this area more than 1.5 billion “yaba” pills — the Thai name for a tablet containing methamphetamine and caffeine — are manufactured in the vicinity.

“Drugs are the big problem in the northern region of Thailand… there are not enough rehab centres,” said Apisak Wittayanookulluk, deputy director of Thanyarak rehab centre in Chiang Mai.

“Prevention needs to be developed especially in schools as nowadays users and dealers are getting younger and younger,” he said.

Many kids who emerge from the temple’s education system, like Tawan, want to take what they have learned back to their communities.

“At first I just wanted to stay here, but there are many problems in my home,” he said, adding he would like to help local children avoid falling into the drug trap.

“There are still not many alternative jobs. Most people sell and traffic drugs,” he said.

Tawan says that tending the animals and Thai boxing helped keep the kids happy and engaged, in a way that traditional classroom learning alone might not have.

At the temple, the novices spend much of their time on routine daily tasks: feeding and caring for the animals, especially the horses.

They also study the basics of agriculture and cultivation, and help manage several hectares of cultivated vegetables that feed the residents of the monastery.

The ultimate goal of the programme, temple monks say, is to provide a sense of discipline and help the children see they are responsible for their own lives.

And the local community seems to approve of the results.

“The temple helps and supports poor children,” said Suk Namsaeng, 39, who lives in a village just a few kilometres from the complex where the monks come every morning to ask for alms.

“Most of the villagers don’t know how severe and harmful drugs are. Their parents have been drug addicts, so their children in the next generation think that it is normal,” he added.