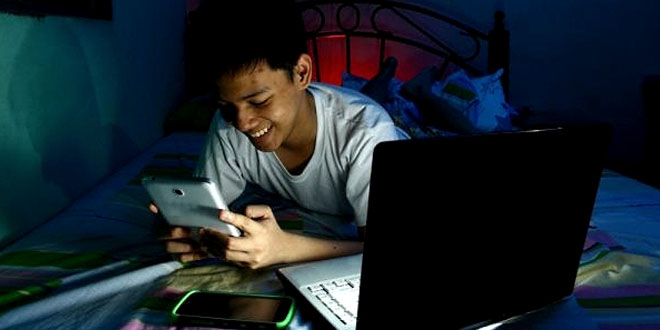 Teenagers spend over 6.5 hrs in front of screens daily: Study

Teenagers average more than six and a half hours a day in front of screens, from televisions to tablets, with pre-teens lagging close behind, a report released on Tuesday said.

Authors of the study, which was conducted by the Common Sense Media organization, emphasized that apart from watching TV, teenagers and pre-teens spend their screen time doing vastly different activities, from social networking to gaming, with patterns varying greatly.

According to the study, teenagers (age 13 to 18) watch television, DVDs or videos an average two hours and 38 minutes daily. They also spend an hour and 21 minutes on gaming and an hour and 11 minutes doing social networking, it said.

In total, teenagers spend an average of six hours and 40 minutes in front of screens, while their pre-teen or “tween” counterparts (age eight to 12) spend four hours and 36 minutes, it said.

The study emphasized that children could spend time in front of a screen while doing other activities, such as cleaning their rooms or participating in sports.

They could also use several media at once, the authors said, explaining that this usage was added up as separate instances of screen time, rather than one instance.

Meanwhile, the 58 percent of teens who report using social networks spend an average of two hours and four minutes on those sites and apps daily.

Only 15 percent of pre-teens, however, reported using social media.

Screenless media that the survey accounted for included listening to music, which 66 percent of teens said they did daily, making it the most popular daily media activity.

Only 58 percent of teens said they watched television programming daily.

The study also accounted for reading time, with 79 percent of teenagers saying they do not read except for what is required for class.

Only three percent said they read the newspaper and five percent read magazines.

The survey of 2,658 US children age eight to 18 was conducted from February to March.

Teenage Troubles and How to Handle Them