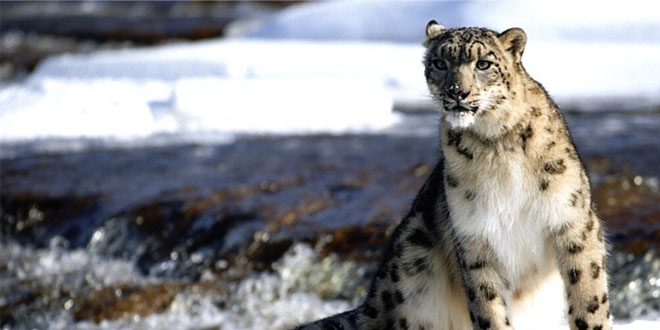 An endangered snow leopard, which the soldiers have named Dolly, has been found by the Pakistan Army personals, near their check post at Khunjerab Pass. This is the first male snow leopard seen in the last 15 years.

A soldier at the check post informed HTV that their team had found the mountain leopard roaming in a confused manner on the main Karakoram Highway (KKH). They were able to capture it, so the leopard could be transferred to safer areas.

One of the soldiers mentioned that,

“In 15 years, this was only the second snow leopard which had entered human occupied territory – the earlier one was taken by the chief of the armed forces and president at the time, General Pervez Musharaf.”

He said that it is possible that the young inexperienced animal might have taken a new migration route, due to the recent floods or landslides. It may have lost track due to ecological change, development, or the extension of the KKH. Chinese engineers along with Pakistani counterparts are currently working all over the KKH.

“In comparison to other wild cats, snow leopards may seem to look a bit smaller and less dangerous, but their huge paws make them as deadly as any other wild cat. Dolly is young, but an adult male can easily break a human skull,” informed the army man.

Snow leopards are found at elevations of 2700-6000 meters, moving from higher altitudes to relatively lower altitudes in winter. The species are usually seen in the high coniferous forests and at times in open lands in the Northern plains.

“Their wide paws and long furry tail allows them to balance, while jumping over the mountains at a high speed, which makes them traceable only from a helicopter.”

The accelerated deforestation in the last 25 years has degraded the habitat, disturbing the ecological system, leaving less than 2500 male snow leopards. These figures include the overall region – not just Pakistan.

The snow leopard has been categorized as an endangered species. It has been added to the IUCN Red list through the US Endangered Species Act.