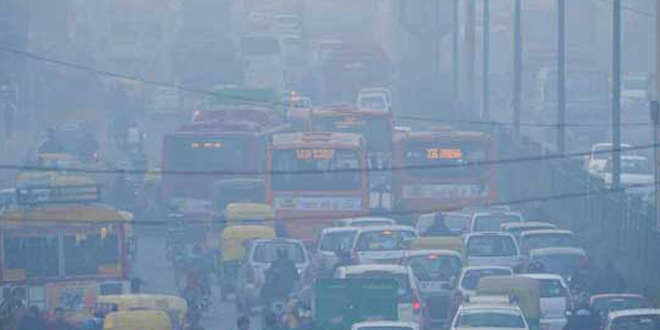 Millions of Delhi residents will have to find alternative ways to work from Friday, when authorities launch a trial of draconian traffic restrictions to try to clean up the world’s most polluted capital.

Private cars will be banned from the roads on alternate days from January 1 as part of a slew of measures aimed at reducing smog levels that include shutting some coal-fired power plants and vacuuming roads to reduce dust.

It will run for an initial two-week trial period, but many commuters fear the government will have little choice but to introduce a longer-term ban given the scale of the problem.

However, some critics warn the measures will be unenforceable in a city where traffic rules are already routinely flouted.

“The biggest challenge is to make people realise that this fight against pollution is for them, for their health, for their own good,” Delhi’s transport minister Gopal Rai told AFP.

“They will only be cheating themselves with ‘jugaad’. There is no magic button that will make the pollution disappear. We must act now.”

To cope with the extra pressure on the public transport network, Delhi’s government has hired around 3,000 private buses to provide shuttle services into the city from residential areas.

Schools have been ordered to remain closed until the trial ends on January 15 so that their buses can be pressed into action.

Traffic police and 10,000 volunteers will monitor cars at checkpoints across the city and violators will be fined 2,000 rupees ($30) — extremely steep for the average resident.

Around 8.5 million vehicles clog up Delhi’s roads and 1,400 new cars are being added every day as the city’s residents become more affluent.

That has contributed to Delhi being the most polluted of 1,600 cities around the world that were surveyed by the World Health Organization last year.

The city has in recent weeks been enveloped in a toxic soup that has cut visibility and pushed PM 2.5 levels more than 10 times over the WHO’s recommended safe limit.

These extremely fine particles — less than 2.5 micrometres in diameter — are linked to increased rates of chronic bronchitis, lung cancer and heart disease.

The new restrictions, in place from 8am to 8pm everyday except Sunday, will allow cars with odd-numbered licence plates to drive on odd-numbered dates and those with even-numbered plates on the others.

They have divided Delhiites, with many looking forward to the novelty of congestion-free roads while others in the city’s vast commuter belt grumble that getting to work will be impossible.

Many have complained the plan ignores other sources like dust-generating construction sites, crop burning and dusty winds from the arid west.

Environmental campaigners point out there are dozens of exemptions to the driving ban, including dignitaries, women driving alone and motorcycles — which it says contribute up to 31 percent of total vehicular pollution.

“Let’s not convince ourselves wrongly that a simple odd-even policy will solve the overall air pollution issue,” Arunabha Ghosh, head of the Delhi-based Council on Energy, Environment and Water, told AFP.

“Otherwise, we will be simply kicking the can down the road and we will create a feeling of distrust among citizens and the government machinery.”

Since then India’s breakneck development, generous diesel subsidies and low emission standards have led the city’s air to deteriorate to a point where it claims up to 30,000 lives every year, according to the Delhi-based Centre for Science and Environment.

Beijing imposed similar restrictions ahead of the 2008 Olympics, producing its best air quality in a decade.

Analysts, however, say India’s ingrained culture of corruption and non-compliance will make that harder to achieve than in authoritarian China.

“Rickshaw, then metro, then feeder bus, then walk – back and forth. A travel nightmare,” the 42-year-old said.

“But if it makes breathing easier, then it may be worth it.”