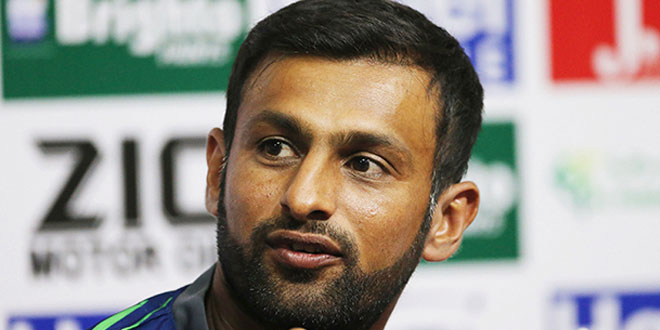 Former Pakistan captain Shoaib Malik announced his retirement from Test cricket after he failed in the second innings of the third Test against England in Sharjah on Tuesday.

The 33-year-old only made a comeback in the longer format of the game after five years in the first Test against England in Abu Dhabi, smashing a career-best 245.

But since then he has made nought, two, seven, 38 and nought in the remaining five innings of the series, prompting him to call it a day.

“I am retiring from Test cricket after this match,” Malik told reorters. “The reason of my leaving Tests is not because of slump in form but it’s because I want to give more time to my family and concentrate on the 2019 World Cup.”

Malik was married to Indian tennis star Sania Mirza in 2010, a wedding widely publicised across Pakistan and India.

“I realised today that this is the right time to leave the place for youngsters and Pakistan have many talented players who can fill in,” said Malik, who made his Test debut against Bangladesh in Multan in 2001.

In all, he played 35 Tests, scoring 1,898 runs with three centuries and eight half-centuries.

He has so far taken 29 wickets, with his best figures of 4-33 coming on Tuesday against England in Sharjah, a figure to which he can possibly add a few in England’s second innings.

Malik said he was thinking of the retirement even before he scored the double hundred.

“I could have played more but this is the right time and I think our Test team is established and there are a few youngsters like Haris Sohail, Babar Azam, Sohaib Maqsood and Mohammad Rizwan who are very talented and can fill in.

“Even when I scored the double hundred and before that I had thought about leaving Tests. It’s with satisfaction that I am leaving Test cricket,” said Malik.

“I will continue to play one-day and Twenty20 and would like to give good performances. I want to preserve my energy for the World Cup because I have played only in one,” said Malik, who played the 2007 World Cup in the West Indies.

Malik also briefly led Pakistan in Tests, losing two and drawing the other in 2007.

Malik said not playing in Tests from 2010 to 2015 was a disappointment.

“I didn’t play Test cricket for five years and those were the years when I wanted to play Tests and that is the only disappointment,” said Malik.