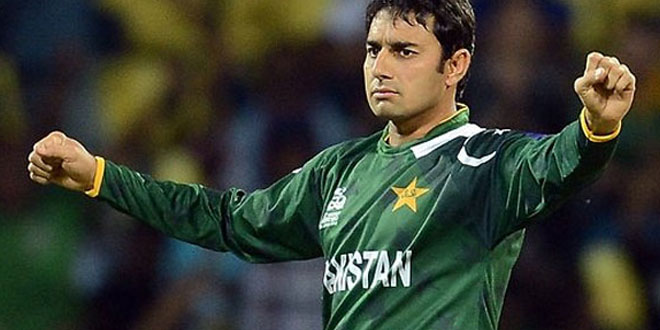 Ajmal is Back: PCB Announces Squad for Bangladesh Tour

Pakistan’s Squad for the tour of Bangladesh has been announced by the Pakistan Cricket Board (PCB) in a press conference led by PCB Chief Selector Haroon Rasheed. Many changes were expected,  after closely observing Pakistan’s campaign in the ICC Cricket World Cup in Australia.

Spin wizard Saeed Ajmal returns to all three formats of the game. Ajmal missed the World Cup as his bowling action was under scrutiny. His inclusion in the squad was a must afterthe International Cricket Council cleared his remodeled bowling action earlier in February. Saeed Ajmal will be looking to take this opportunity hands on and to restart his cricketing career.

Muhammad Hafeez also known as the “Professor” returns back to all formats of the game as well. He missed the World Cup due to a calf injury sustained in the series against New Zealand. Returning back as the T20 captain, he’ll be looking to make it a winning series in Bangladesh. He is scheduled for a test with the ICC on April, 9th to clear him of his bowling action.

Right handed batsman, Asad Shafiq makes it back into the Pakistan squad. He played against New Zealand in UAE in December. He has scored three fifties and a century in the domestic ODI’s in Pakistan. Fawad Alam also made it in the squad.

Newly appointed ODI captain, Azhar Ali is also back in the squad. Left handed batsman Sami Aslam will be making his debut for Pakistan. He led the Pakistan under-19 team in the2014 World Cup. Selectors have shown faith in Muhammad Rizwan as well. Haris Sohail, Sohaib Maqsood, Wahab Riaz, Ehsan Adil, Sarfraz Ahmed keep their slots in the ODI’s. Younis Khan has been rested for the ODI format and will be playing in the longer version.

Misbah-ul-Haq will be leading Pakistan in the longer format of the game. Babar Azam, will be debuting in his first ever senior series for Pakistan in the test match format. His batting average of 53.22 in the recent first-class season and 63.44 in the ODI format led to his selection.

Sami Aslam is also named in the squad while pace bowlers Ehsan Adil, Imran Khan, Muhammad Talha were left out. Opening batsmen Shan Masood and Taufiq Umer also sit out the series while left arm spinner, Zulfiqar Babar makes it back into the test squad. Left arm speedster, Junaid Khan returns back to the Test squad after missing out on the World Cup with an injury as well.

For the T20 format, new faces were taken into consideration. All-rounder Anwar Ali, left hand opening batsman Awais Zia and left arm spinner Raza Hassan have been dropped from the squad which played in the UAE in the last tour.

Sohaib Maqsood, Muhammad Rizwan and newbie Mukhtar Ahmed have been selected. Mukhtar Ahmed is a promising young talent. Only 22, he has played five T20 domestic matches. He has scored two fifties and a hundred this year and also helped the State Bank Of Pakistan, to win the President’s Trophy this year. He also has scored a ton in T20 matches with a staggering strike rate of 161.15

Pakistan will arrive in Dhaka on April 13th.