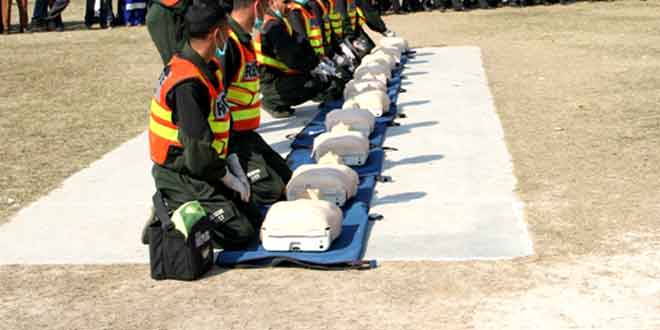 The inauguration of the third sports Gala organized by rescue 1122 in toba tek Singh was held today (26th March 2015).

The credit of the current sports Gala being held in Toba Tek Singh goes to the district emergency officer, Faraz Muneer for his untiring efforts. The event was inaugurated by the cricket shot played by chief guest Waqas Alam – DCO.

Two cricket matches were played today, one between Faisalabad and Jhang and the other between Toba tek Singh and Jhang. The jhang team lost both the matches. In the end of the day one, the chief guest, regional officer rescue, Rafat Zia rewarded the winning teams with prizes. These games will last for four more days.

Sports in Pakistan has been in the limelight for a couple of years now due to law and order situation and the nations war with terrorism but the Pakistani individuals and institutions are trying its best to keep sports alive in the society.

It is essential for such sport galas to take place at regular intervals to promote healthy sporting activities. Secondly, this should not be restricted to major sports such as cricket but all forms of sports including gymnastics.

According to sociologists, a society gains in many ways, when the government encourages sports and games everywhere, provides playgrounds, the necessary equipment and other facilities, and rewards outstanding sportsmen, so as to encourage others also to play games. The crime graph dips, which means that the incidence of general crimes decreases because the right spirit and the right approach to things is developed on the playground.

Currently, a ‘tour de Punjab’ cycling race is held in Punjab. Cyclists in huge numbers from all parts of Pakistan participated in the competition, but only few have made it to the final stages being held in the present days. The better performers are either from Balochistan or Sindh. The cyclists have currently reached Lahore. Many cyclists have spoken about the lack of interest and support of the government in sports.

Likewise, Pakistani bodybuilder Atif Anwar on 15th March 2015 won a title at the Arnold Classic body building competition held in Australia. Anwar won the ‘over 100 kg class’ title at the event named after Hollywood legend and seven times Mr Olympia, Arnold Schwarzenegger. Although the passion of body building can be found throughout Pakistan, it has never been openly considered as common sports.

Exercise in some form or another is necessary, and sports provide an easy method to ensure such fitness. Bodies which are not kept in smooth trim and in an overall fit condition, their brain refuses to co-operate after some time. Physical fitness is essential for proficiency in studies and for winning distinctions in examinations. Ailing bodies do not make for sharp brains.

Secondly, regular participation in sports provides a healthy channel for diversion of energies. Wherever students and other youth participate in sports regularly, misdirection of youthful vigor is much less and the tendency to indulge in indiscipline and mischief is curbed.

It is must for Pakistan to realize that a sport is not only a manifestation of energy of surplus strength to develop more strength; it is, in addition, a safe and wholesome outlet for the aggressive spirit in human beings.