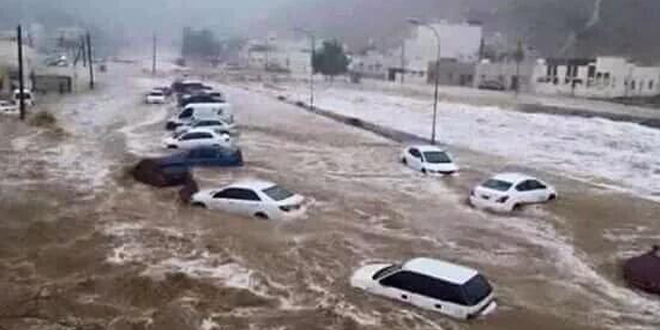 A rare tropical cyclone has slammed into Yemen, triggering heavy flooding and causing “enormous” damage in a region of the war-racked country dominated by Al-Qaeda, a senior official said Tuesday.

Packing winds of more than 100 kilometres (62 miles) per hour, Cyclone Chapala made landfall in the southeastern provinces of Hadramawt and Shabwa, Minister of Fisheries Fahd Kafain told AFP.

“The damage is enormous and we fear human losses,” said the minister, part of a commission set up to deal with the cyclone that brewed in the Arabian Sea.

The World Health Organization said that it had delivered trauma kits for 1,000 patients in Mukalla and was providing fuel for hospitals and ambulances.

It said Hadramawt and Shabwa had a combined population of about 1.8 million people including more than 100,000 internally displaced and 27,000 refugees and migrants.

The storm earlier wreaked havoc on the island of Socotra located 350 kilometres off the Yemeni mainland.

More than 200 people were injured and dozens of houses and hamlets were severely damaged or washed away, said Salem Zaher, mayor of the island’s main district Hadibo.

The Yemen Post newspaper described the city as being “under water”, saying on Twitter that Chapala “drowns city with 40 inches of water.”

Cars were half-submerged in muddy water while seafront roads were badly damaged by high waves.

“The rainfall from Chapala is far beyond anything ever witnessed in this arid area which is not used to cyclones,” the UN weather agency said on Monday.

But Chapala has since rapidly lost strength, it said.

“Due to rugged terrain, dry air intrusion, increase in vertical wind shear and decrease in divergence, the system weakened rapidly into a cyclonic storm and will further weaken into a depression during (the) next 12 hours,” it said in a statement.

Mukalla has been mostly controlled by Al-Qaeda in the Arabian Peninsula since April.

The militants have taken advantage of the chaos that has engulfed the country since Huthi Shiite rebels overran the capital Sanaa in September 2014 to tighten their grip on the sprawling southeast.

Neighbouring Oman downgraded its state of alert, saying the cyclone had moved westwards and would not directly hit the sultanate.

However, the Omani meteorological agency warned that waves as high as three metres (10 feet) were still expected to hit the shores of Dhofar and Al-Wusta provinces.

Impoverished Yemen is already facing a deep humanitarian crisis with a severe lack of food and medicine caused by the conflict.

Around 10 million children are in desperate need of humanitarian aid, the United Nations warned last month.