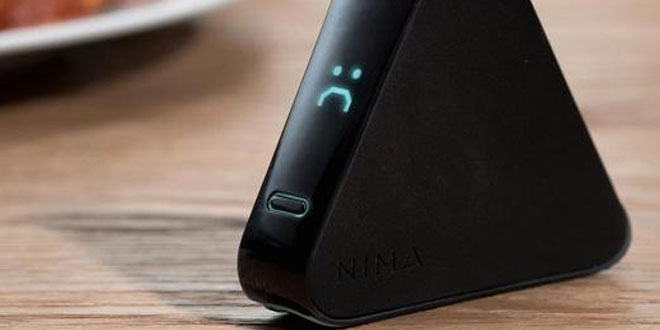 A new pocket accessory offers a helping hand to anyone with a gluten allergy or intolerance. It’s due to launch in 2016 in the USA.

To check if a dish is gluten free, simply put a sample of food into the tester. If a smiley face appears, the meal is guaranteed gluten free, but if the face looks unhappy, then there’s a chance the dish contains the allergen.

Picked as one of Time Magazine’s Best Inventions of 2015, the Nima portable gluten tester can detect the presence of gluten in foods, even at very low levels (from 20 ppm). The innovative accessory gives users results in under two minutes.

Plus, according to one of the founders of 6SensorLabs, who developed the Nima, the device has been proven 99.5% accurate in 3,000 comparative tests carried out during development. The Nima has also been tested by two independent laboratories.

The device can analyse a wide variety of foods, from soup and sauces to meat and other solid foodstuffs. It fits neatly into a pocket thanks to its compact rectangular build, and requires single-use capsules for each test so there’s no need to worry about cleaning. The system could potentially be extended to cover other food allergens, such as dairy or peanuts.

Nima is currently available to pre-order from the website Nimasensor.com, priced US$199 (RM799) for the device plus a starter kit of three capsules. It’s due to go on sale from the San Francisco-based start-up this year.

An application will then be launched to connect the device to a smartphone, so gluten-free eaters can review their results and share data with friends, letting them know, for example, about a restaurant with a gluten-free menu or dish.

In the USA, 1% of the population is thought to suffer from coeliac disease, a chronic infection of the intestine triggered by an adverse reaction to gluten.