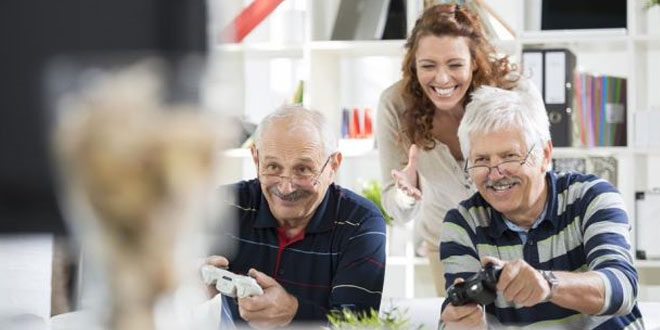 A new study has found that fitness games, also known as ‘exergames,’ can help relieve depression and its symptoms in seniors, especially if the games have a highly playful element.

Researchers from the Wee Kim Wee School of Communication and Information, Nanyang Technological University, Singapore, looked at 49 senior adults with sub-threshold depression, a more minor, rather than major, depressive disorder.

The participants’ depression, positive emotions, and self-efficacy – their belief in their own ability to complete tasks and succeed – were all measured before and after the six-week study.

After taking into account variables such as age and gender the results showed that all participants showed improvements in their sub-threshold depression and self-efficacy, regardless of which gaming condition they had been placed in.

The researchers now believe that their results can help in the future development of exergames to improve mental health, and not just physical health, among older adults.

The full study can be found online in the Games for Health Journal.

Many previous studies have already shown that as well as helping to improve physical health though playing exergames, videogames can have various other health benefits for players of all ages.

A 2013 UK study found that playing videogames in which players need to use memory and tactical skills, such as the videogame StarCraft, could help to train the brain to become more agile and improve strategic thinking.

And an earlier 2013 US study found that playing videogames may prevent and even reverse a decline in cognitive skills such as memory, reasoning and visual processing in the over-50s.

A study published earlier this year which also focused on the benefits of exergames showed that playing the Nintendo Wii for 20 to 30 minutes per day for just one week can also help reduce pain for burn victims by helping the patients get used to moving again and giving positive feedback to nerves.

videogamesvideogames actions on depression
Comments
Loading...
Stay With Us