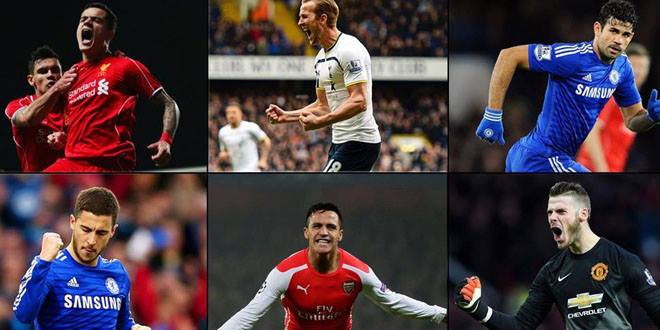 The nominees for the PFA Men’s Player Of The Year award are:

It is said that it’s going to be a tough decision between Chelsea’s talisman Eden Hazard and Spurs hitman Harry Kane.

Hazard has scored 12 goals this season in the league. Apart from his goals, he has proven himself as the complete number 10 material by providing 8 assists on crucial occasions. His recent assist to team-mate Cesc Fabregas’ goal against QPR led to a 1-0 win for the Blues.

Harry Kane on the other hand has been a relevation. He is the joint top scorer in the Barclays Premier League with 19 goals tied with Diego Costa and Sergio Aguero. Harry Kane has also made his debut for the England National Team this year.

Alexis Sanchez has been absolutely emphatic in his debut season in England with Arsenal. The former Barcelona man has scored 20 goals this season, 14 of which have come in the Barclays Premier League.

The PFA Young Player Of The Year nominees are:

Thibaut Cortious and David De Gea have been crucial in goal for their respective clubs. It is quite hard to pick one over the other at this stage of the season, but maybe the Saturday clash between Chelsea and Manchester United will prove to be the decider. Liverpool duo of Phillipe Coutinho and Raheem Sterling have showed that young talent will always have a say in the Barclays Premier League. Despite of Liverpool’s mediocre campaign in the league, the dynamic duo of the Merseyside club has propelled Liverpool to the semi-finals of this year’s edition of the FA Cup.