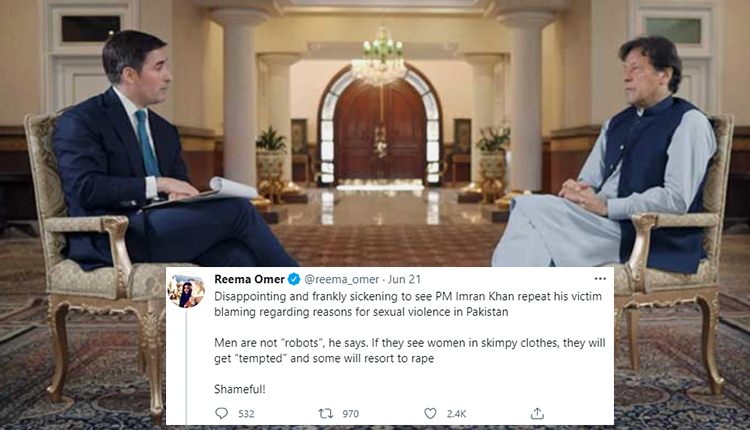 Prime Minister Imran Khan in an interview with “Axios on HBO” with journalist Jonathan Swan, which aired on 21st June, said that “if a woman is wearing very few clothes, it will have an impact on the men unless they are robots” which has sparked outrage not only in Pakistan but globally as well.

When journalist Swan asked PM Khan about his earlier remarks on vulgarity and rape in Pakistan, PM said that it is “such nonsense”.

Swan further asked: “Do you think that what women wear has any effect, that’s part of this temptation?”

“If a woman is wearing very few clothes, it will have an impact on the men, unless they are robots. I mean it’s common sense,” replied PM.

His words regarding women’s clothing weren’t taken lightly by Pakistanis, who took to social media platforms to inform the honorable prime minister that the act of assault, rape, and harassment has nothing to do with a woman’s dressing. His words even made it to the international TV channels and even his former wife, Jemima Goldsmith, has criticized him for his insensitive remarks.

“If a woman is wearing very few clothes it will have an impact on the man unless they are robots. It’s common sense," Pakistan Prime Minister Imran Khan said in an interview, which aired on Sunday.https://t.co/3uTLlbXsnh

Jemima stated that the problem is not how women dress!

I remember years ago being in Saudi Arabia and an elderly woman in an abaya & niqab was lamenting the fact that when she went out she was followed & harassed by young men. The only way to get rid of them was to take her face covering OFF.
The problem is not how women dress!

Dear PM @ImranKhanPTI stop humanising the rapists, abusers and harassers and stop objectifying the victims. You may not realise it but when you repeatedly stress upon the clothes of a woman as a cause for temptation leading to sexual violence you do exactly that.

Children are sexually assaulted here. Corpses are defiled. Women in burqas, women in appropriate clothing are abused. These are statistics you can easily Google.
You know why you'd never rape a woman in a nude beach in Europe? Because you'd be shit scared of the law. https://t.co/p6g7tUqt8c

Gharidah Farooqi is disgusted with the statement of Imran Khan.

Disgusted. Appalled. Outraged. Strongly condemnable. No, Mr PM Khan, women clothing is NOT responsible for temptation leading to rape/assault/violence. ABSOLUTELY NOT!
This is victim blaming and giving a pass to men. Don’t insult victims. Don’t justify rape as temptation.

According to Shahmir Sanni, men should be held accountable rather than the way women dresses.

What is most heinous about Imran Khan’s justifications for rape, is that nearly every woman that has been raped in Pakistan has worn what he would prescribe as modest clothing. This has nothing to do with clothes, but just another man trying to escape accountability. It is sick.

In a country where cases of sexual assaults are not reported, and victims do not come out of the fear of being blamed, it is sad to see that our Prime Minister, Imran Khan is promoting rape culture by propagating dangerous rape myths.

Here’s how Pakistanis can help and donate to Palestine