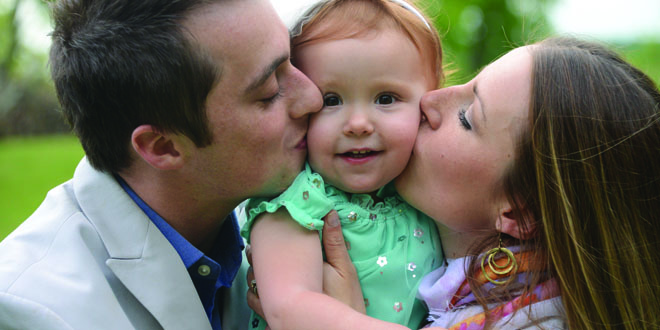 Research from the University of Notre Dame, USA, has found that parents’ affection and support in childhood can have lasting effects on development well into adulthood.

University of Notre Dame professor of psychology Darcia Narvaez believes that our childhood experiences need to be in line with our evolved needs – the characteristics of parenting that have been used since our distant ancestors but which are becoming less common in today’s society – in order to lead to better developed adults.

These evolved needs include six different components – soothing, naturalistic perinatal experiences, responsiveness to a baby’s needs including sensitivity to the signals of the baby before the baby cries, constant physical presence with plenty of affectionate touch, extensive breastfeeding, playful interactions with caregivers and friends, and a community of affectionate, mindful caregivers – which lead to better child development.

To research her theory Narvaez and colleagues questioned over 600 adults on their childhood experiences, asking how much physical affection they received as children, did they play freely outside and inside the home, did they do things as a family inside and outside the home, and did they feel supported by parents.

The adults who reported receiving more of these parenting practices in their childhood showed less depression and anxiety, more compassion, and a greater ability to look at things from another’s perspective as adults.

However adults who reported less of these parenting practices in their childhood showed poorer mental health, more distress in social situations, and were less able to take another’s point of view.

“Our research shows that when we don’t provide children with what they evolved to need, they turn into adults with decreased social and moral capacities,” commented Narvaez.

“With toxic stress in childhood, the good stuff doesn’t get a chance to grow and you become stress reactive. It’s hard to be compassionate when you are focused on yourself. We can see adults all around us who were traumatized or undercared for at critical times.”

The children who experienced more of these parenting approaches showed better mental health, greater empathy, more self-control, and a higher level of intelligence.