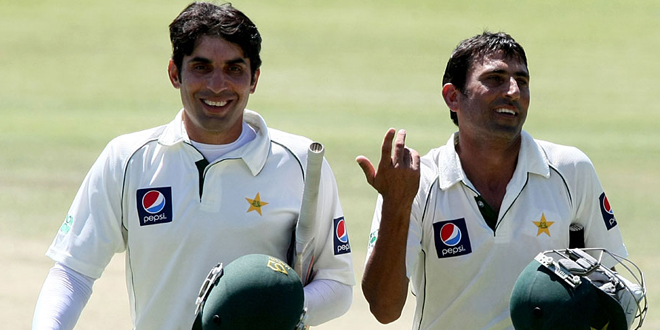 Pakistani Fans Hopeful for a “Veteran Show” at Khulna

After experiencing a humiliating whitewash in the One Day Internationals and a first-ever Twenty20 defeat at the hands of Bangladesh, Pakistani fans are hopeful for a “veteran show” as Misbah-ul-Haq and Younis Khan return to the squad for the start of the first of the two test match series.

Misbah-ul-Haq, who turns 41 next month, returns to International Cricket after announcing his retirement from the limited over format at the end of Pakistan’s World Cup campaign. Younus Khan, 37 wasn’t selected.

Sami Aslam greatly appreciated the inclusion of both Misbah and Younus in the test squad. The 19-year old said, “They are very experienced and Pakistan has usually done well when they are around.”

He added, “Both are world-class players and they are sure to make the difference in the series”

Younus Khan, already Pakistan’s highest Test century record holder with 28, will be lookinng to emaluate another milestone as he requires only 506 runs to surpass Javed Miandad’s tally of 8,832 runs to become Pakistan’s all-time leading Test scorer.

Hopeful of getting a Test debut tomorrow, the left handed batsman Sami Aslam expressed that Test matches are a different ball game than ODI and T20’s.

He said, “Tests are entirely different and I am pretty confident my team will do better in this format.”

Bangladesh all-rounder Shakib-ul-Hassan is hopeful that his team will keep the winning mentality, going as the underdogs in the series. He said, “I think it will be a good series if we can show the same level of play and confidence.”

He added, “If Pakistan has an experienced batting line-up, we too have a number of batsmen in form. We have a better bowling attack and the fielding too is good. This will be a tight series.”

The squads for the test series are as follows:-