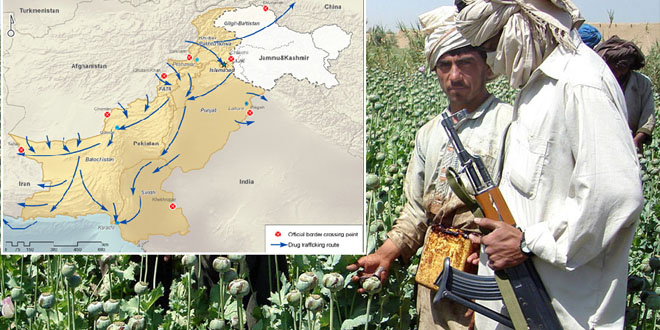 Drug addiction results up to 700 deaths per day in Pakistan

There is a nexus of many major transcontinental criminal industries functioning from, through and in Pakistan; these include the arms smuggling and human and drug trafficking. This makes drug addiction a common problem among the masses.

As per the UNODC Pakistan, these criminal industries are the major sources of revenue for terrorists groups within and outside Pakistan, including the Afghan Taliban, TTP groups, the BLA and other bandits in Balochistan.

US author Gretchen Peters, in her book ‘Seeds of Terror: How Heroin Is Bankrolling the Taliban and al Qaeda’ revealed that the Taliban has different sources of income and for each source there is a Taliban commander, like bureaucracy. Drugs suit them best.

“It is clear from the rule books the Taliban issues, that the Taliban headship in Pakistan is trying to get a better hold on the funds,” she writes.

In one part of the book she even said that the Taliban heads at the Pak-Afghan border punished certain commanders for delaying the sending of the money.

The UNODC Pakistan, working from Islamabad, for the last 35 years, is responsible for domestic and transnational issues that affect Pakistan and is of the view that the drug issue has exacerbated during the last 35 years.

Pakistan shares a 2430km long border with Afghanistan, the world’s largest producer of opium – all illicit. The country itself has poppy cultivation on an area of more than a thousand hectares in the Federally Administrated region (FATA). In this porous bordered region, cannabis is also produced on a large scale, though most of it in Afghanistan, but easily accessible in FATA. Therefore Pakistan is geographically an exposed state to drug trafficking.

The complications of drug trafficking are being felt throughout the world – if not directly, then in terms of the funding of enemies in the long-fought war of terrorism. The world now recognizes Pakistan for its sacrifices for the war, but the country has puzzled many by its relaxing policy towards drug trafficking – a major way of revenue generation for terrorists and global criminals.

Although Chief of Army Staff General Raheel Shareef and Interior Minister Chuadhry Nisar Khan have pointed out the nexus, many a times, but the country’s anti-narcotics forces are seen of the very opposite view and they have recently denied any relation between the two cancers in Pakistan: terrorism and drugs.

Pakistan has become a prominent transit for opiates produced in Afghanistan – approximately 40 percent. The majority of procedures related to the drug are conducted in small mobile labs in at the Pak-Afghan border with help of Central Asian Republics.

For Pakistan, the problem has doubled as the region – the tribal belt and Balochistan – has become a major opiate customer. This has further developed problems such as drug abuse and addiction.

Pakistan is estimated to consume 20 tons of heroin annually. The figures and the problem are increasing and with the blind eyes of the authorities, it seems like it will increase in future.