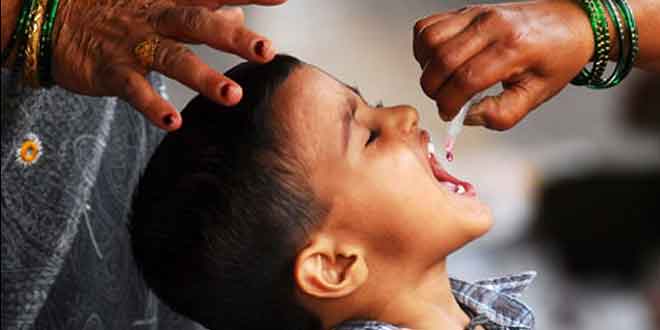 Pakistan now stands as the main barrier to the global elimination of wild poliovirus. Whereas there hasn’t been a case in Nigeria in the past nine months with only one case surfacing in Afghanistan so far this year.

It seems the battle is being won everywhere, except Pakistan where, statistics remain highest throughout the world, with chances of new cases. Aziz Memon, a Karachi-based businessman who chairs Rotary International in Pakistan and leads the charity’s polio initiative, estimates that effect of the ban and the killing of vaccinators and tribal conflicts. Pak-Afghan border crossings and military operations cause nearly 400,000 children to remain unvaccinated.

In Pakistan polio coordinators have found ways around the ban, setting up vaccination spots on transit routes or regional borders, sometimes sending in vaccine with civilians and regretfully acknowledging that it has been often Taliban officials who have quietly asked for the vaccine.

Four thousand police were mobilized on the streets of Peshawar to support a vaccination day this year, and more than 200,000 people were vaccinated in North Waziristan when they fled their homes after a military offensive against terrorists.

Such on the ground efforts have been matched by intense political lobbying, replacing the visible presence of international NGO’s with local NGO’s, highlighting funding from the Islamic Development Bank, and working with the Pakistan government, as well as opposition leaders like Imran Khan, for support across the spectrum.

“But you have this goal which is the ultimate in disease control: eradication. And that is also the ultimate in equality. The imperative of this program is that in order to succeed you have to reach everybody. You have to reach people who, no matter what their risk and their religion might be, or even their opposing views to yours – you still need to vaccinate their children.”

Pakistan is rallying. There have been only 22 cases so far this year, compared with almost 60 at this time last year. Violence has abated, at least in the past month. Emergency operations centers, an important innovation to help monitor the virus, have been set up.

Experts also applaud another recent tactic, the recruitment of female volunteers to work on vaccination in their own communities with approval from local religious and tribal leaders. This approach seems to be making headway in previously inaccessible areas. Pakistan’s political leadership also has vowed a renewed campaign. The World now expects Pakistan to eradicate Polio by February, 2016.

In a high level meeting held in Qatar, a delegation led by Health Minister Saira Afzal Tarar presented the case for Pakistan and gave a briefing over the Polio situation to the Independent Monitoring Board.  The secretary of Fata, on the occasion, said that the polio cases had decreased in the current year compared to previous years and vowed to eradicate polio virus from the country within one year.

He further informed that polio cases had decreased by 86% compared to last year.  60 children were diagnosed with the virus as per 30th April’ 2014 whereas this year it has gone down to 22 children. He further said that the untiring efforts resulted in the eradication of polio virus from North/South Waziristan, Gadap -Karachi and only Khyber Agency was left.

If polio eradication is a 20th-century dream, conceived by idealists and driven by big international institutions and volunteers, it must succeed or fail in a century marked by factionalism, religious intolerance and rising inequality. It may have taken an outbreak of an even more terrifying disease, Ebola, to demonstrate the crucial role what eradicating a disease of the past is playing in containing the diseases of the future.