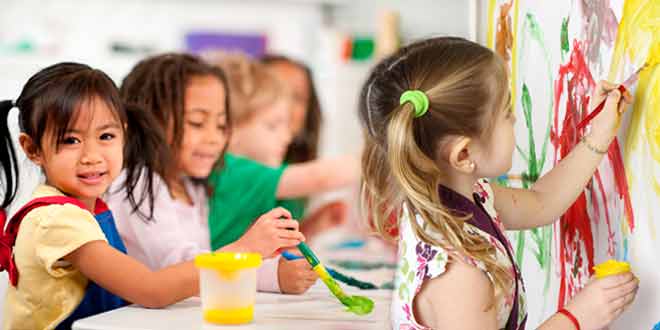 Toddlers can figure out how to make and use simple tools without being taught, said a study that defies conventional wisdom and earlier research.

Humans are unique in their capacity to design and wield sophisticated tools, but it has been widely assumed that such skills are passed down through imitation and learning.

Not always, according to scientists who designed a set of experiments to test whether children between the ages of two and three-and-a-half demonstrated an innate ability to invent tools.

A team led by Eva Reindl, a professor at the University of Birmingham’s School of Psychology, devised a dozen tests for 24 boys and 26 girls, according to the study published in Proceedings of the Royal Society B.

Each required that a child, playing alone, repurpose an object as a tool, and then use it in an unfamiliar way to achieve a specified goal.

The tests were all modelled on tasks performed by great apes such as chimpanzees, a species with whom we share 98.8 percent of our DNA.

“The idea was to provide children with the raw material necessary to solve the task,” said Claudio Tennie, a Birmingham research fellow.

“We told the children the goal, but we never mentioned using the tool.”

In one task, for example, the children had to use a wet stick to collect polystyrene beads and then deposit them into a box, much as apes poke twigs into nests to gather ants for a snack.

In another, the toddlers had to figure out how to retrieve an adhesive label from inside a covered box — the trick was to perforate the cover with a stick.

For 11 of the 12 tasks, children frequently came up with the “right” solution, even if some failed in the execution of their plan.

Only a single child figured out how to use a clay hammer to crack a plastic nut and obtain it’s contents, corresponding to a food-gathering behaviour that is fairly rare among apes.

Overall, the actions most common among chimps and orangutans in the wild were the ones most easily completed by the toddlers.

“While it is true that more sophisticated forms of human tool use indeed require social learning, we have identified a range of basic tool behaviours which seem not to,” Reindl told AFP by email.

This does not necessarily fit into the time-worn Nature vs. Nurture debate, which has sought to distinguish between innate and learned abilities, she added.

“Behaviour emerges through an interplay of several factors which all affect each other — environment, genetic dispositions, social and individual learning,” said Reindl.

Toddlers are a lot smarter than you think