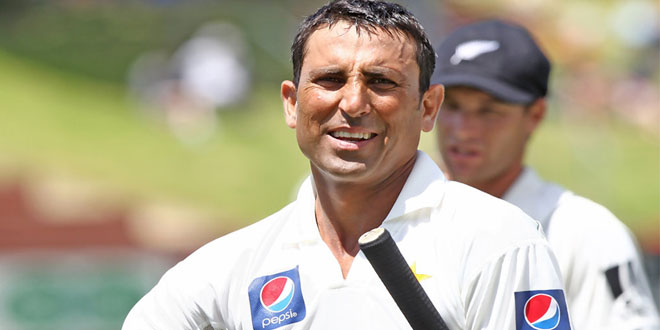 More to come from me, says Younis Khan

Younis Khan has come a long way to be Pakistan’s highest run-getter in Test cricket, but he says he is still not satisfied.

The 37-year-old overhauled Javed Miandad’s aggregate of 8832 runs on Tuesday during his knock of 38 against England in the first Test in Abu Dhabi, adding to his already achieved Pakistan record of 30 centuries.

He achieved the milestone in his 102nd Test, 22 less than Miandad. He compared the achievement to “climbing a wall” for someone who hails from the small town of Mardan in the northwest of Pakistan.

“I have climbed the wall but still want to go on as I am never  satisfied with my achievements. When I look back on my career I came to Karachi to play for Pakistan and had to struggle a lot.”

Younis said his motivation came from his late father.

“My father was the greatest motivation for me,” he said. “He was a hard worker to the core and instilled in me that knack.”

“Younis was struggling as he was not given a chance in the Karachi team so he came to Latif and me and we saw him scoring a brilliant hundred so we sort of helped him in his progress,” said Ali.

“His best quality is that he is honest, plays for the team and country and gives his best which are the qualities of a great player.”

He scored 514 runs with two hundreds, one against Karachi, to announce his arrival on the national level in 2000.

“I had an auspicious start but Pakistan lost that Test match and I was not happy because if you perform and the team loses then its not satisfying,” said Younis.

Slowly and gradually he progressed under the shadow of Inzamam-ul-Haq and Mohammad Yousuf, but former coach Javed Miandad found him different.

“What made Younis different was his approach to the game,” recalls Miandad who had three stints as coach. “He puts up more hard work than any other player which you could easily notice in the nets.”

Younis’s talent was best harnessed by the late Bob Woolmer who guided his comeback to the team in 2004.

“Younis is an excellent learner of the game and the innings he played in Bangalore against India is one of the best I have seen,” said Woolmer of Younis’s 267 against India in 2005 which helped Pakistan level the series 1-1.

Inzamam, captain on that tour, appreciates Younis’s strong will.

“Younis wasn’t a natural player but he worked very hard and his strong will to always do well for the team made him one of the great players for Pakistan,” he said.

But Younis could not match his success as batsman with his role as a captain despite winning the World Twenty20 in 2009 in England.

A players’ revolt displaced him as captain in late 2009 and the Pakistan Cricket Board banned him for being a negative influence on the team a year later.

That has been the only blemish on an otherwise glorious career.

“I want to be remembered as a proud Pakistani,” said Younis. “It’s a wonderful journey and maybe if I get to 10,000 runs I will be satisfied.”