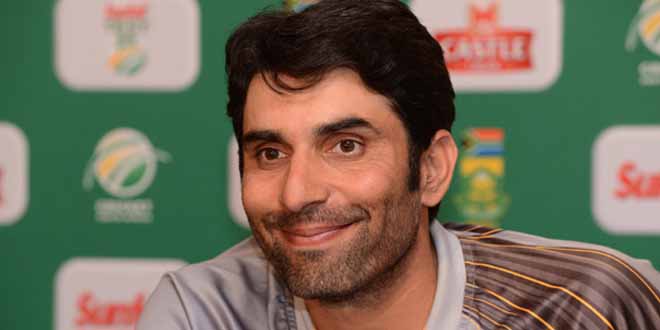 Pakistan captain Misbah-ul-Haq Thursday warned England that fast-rising leg spinner Yasir Shah posed a “threat to every team” ahead of their three-Test series but said his batsmen would have to be at their best against quality opposition bowling.

Pakistan hope Shah and slow left armer Zulfiqar Babar will be able to match the expolits of Saeed Ajmal and  Abdul Rehman who shared 43 wickets between them in a 3-0 rout of England in 2012.

Asked whether Shah would be an equal threat in the absence of Ajmal, who is not selected for the series due to lack of form after remodelling his action, Misbah said: “The way he’s bowling he’s a threat to every team.

“Obviously England know that and he too is aware of it. But it’s not just him but all our bowlers have to play their roles and the batsmen must score consistently well.”

Shah has been leading Pakistan’s spin attack in Ajmal’s abscence, taking 24 wickets in Pakistan’s last series in Sri Lanka and climbing to number three in the Test rankings.

“Yasir has been outstanding in recent times and so has been Babar. But it’s not just them but we expect the fast bowling department also to play their roles by taking wickets with the new ball, especially in Abu Dhabi,” added the skipper, 41.

And he said his batsmen would also need to counter England’s new spin twins Moeen Ali and Adil Rashid.

“Ali has been bowling really well, and he has done well against a team like India, that says a lot of his bowling strength,” said Misbah of Ali, who took 19 wickets in England’s 3-1 home win against India last year.

“Again it’s not just the two spinners we have to respect but the others too. We need to deal with their seamers as well. They have some quality fast bowling.”

England’s pacers include world numbers two and five Stuard Broad and James Anderson, and are far stronger on paper than Pakistan’s which features Wahab Riaz and Junaid Khan.

He also hoped the return of Shoaib Malik — back after five years — would boost the team and give them an extra bowling option.

“He’s playing really well and is in good form. He is here for his bowling as well and will be very useful for us because England have four to five left handers.”