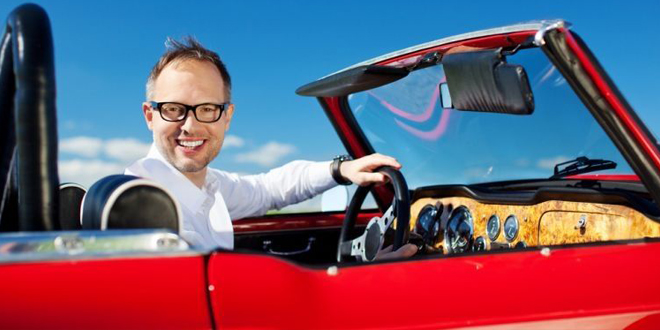 New research released challenges the long-held belief that our happiness levels hit a low point in middle age, causing us to embark on a spending spree of sports cars as part of the “mid-life crisis.”

According to the results of a 25-year study by the University of Alberta, Canada, an increase in our level of happiness starts in our teens and early twenties, but doesn’t necessarily fall as we grow older and reach mid-life.

The results showed that after leaving high school and university, happiness levels increased right through to the 30s in both samples, showing that happiness is not only for the young. And only a slight decrease in happiness was seen by age 43 and only in the ‘high school’ sample, going against the myth of the mid-life crisis.

However, there are other factors that can influence happiness levels such as marital status, unemployment, and physical health, and levels of happiness can differ in different individuals based on these factors.

“If I’m divorced and unemployed, and I have poor health at age 43, I’m not going to be happier than I was at age 18,” commented Nancy Galambos, one of the study’s authors.

“It’s important to recognize the diversity of experiences as people move across life.”

The team believe that the results are important as happiness is key to our well-being, with happier people known to be healthier and live longer. The Canadian government is even collecting information about happiness as part of Statistics Canada’s General Social Survey questionnaire.

“It’s seems trite – ‘just be happy’ – but behind that are the policies shaping society,” says Harvey Krahn, another of the study’s co-authors.

“The policy implications of the study are about changing the conditions that cause grief, like being unemployed, like losing your home, inequality, being a refugee, crime, addictions – these things will make you less happy, age notwithstanding.”