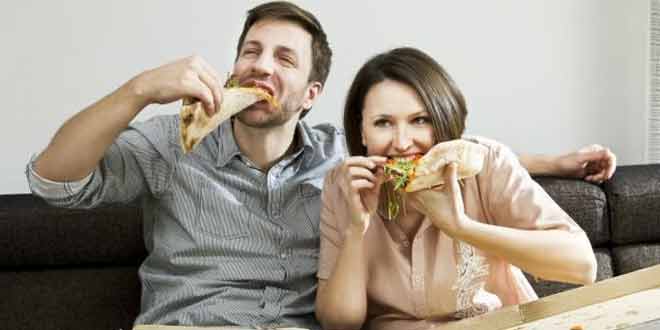 Why men eat more when around women

When it comes to all the tactics men use to show off to women, eating too much pizza isn’t normally one that comes to mind. But according to a study published in the journal Evolutionary Psychological Science, men eat significantly more when dining with women than with other men in order to impress them.

The study, carried out by Cornell University, looked at 105 adults over a two-week period who were dining in an all-you-can-eat Italian buffet restaurant.

Researchers also recorded the gender of the participants’ dining partner or partners. Researchers also asked the diners to answer questions before leaving the restaurant regarding how hurried they felt during eating, how physically comfortable they felt, and how much they think they overate.

Results showed that men who dined in the company of at least one woman ate significantly more of both healthy and unhealthy food than they did when dining with only other men, eating 93% more pizza and 86% more salad.

In contrast, the amount eaten by women didn’t change at all whether they dined with men or other women, although many women surveyed stated that they felt they had overeaten when in male company. The women also reported that they had felt hurried during the meal when dining with men.

Lead author of the study, Kevin Kniffin, PhD, of Cornell University commented that, “These findings suggest that men tend to overeat to show off, you can also see this tendency in eating competitions which almost always have mostly male participants.”

The full study can be found online here.

The results support an earlier 2011 study published in the Journal of Applied Psychology which showed that men purchased more calories in a cafeteria when dining with women.

None of the participants in this study said they were aware of consciously purchasing more of less depending on the sex of their dining companion or companions.

Why men eat more when around women