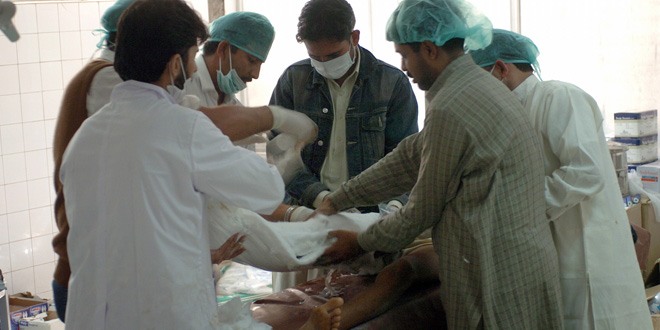 Eid is the time when everyone is in hurry to get their salaries so they can shop and get new clothes on time but there is a large number of lady health workers in Punjab, who have not been paid their salaries for the last two months.

They have been requesting the government and Shahbaz Sharif to resolve their salary issue and to listen to their pleas to pay them before Eid, but it has been of no avail. As a result, they have threatened to protest outside the provincial assembly on the day of Eid.

Rukhsana Awan, the head of Lady Health Workers Program Association said that getting salaries on time is the greatest struggle and challenge they have to face. She also mentioned that many lady workers are the sole bread earners in the family and now their families are forced to starve as their dear ones have stopped helping them financially and they cannot return the money on time.

Dr BaseerAchakzai is the person who is responsible for LHWs at federal level; he claims that the amount has already been released by the planning commission of the Ministry of National Health Services, Regulation and Coordination.

Also, professors and other faculty members of Karachi Medical and Dental College (KMDC) remain deprived of their salaries since April 2015. According to reports, faculty members have threatened the KMC administration to boycott their duties at college if their problems do not get resolved and they also refused to deliver lectures at the Abbasi Shaheed Hospital.

According to sources, grade 1 to 16 employees of KMDC are receiving their salaries on time whereas the faculty members and employees of grade 17 and above are not getting paid on time for the last three months.

The faculty members claim that the senior director of KMC medical services, Dr Salma Kausar is not available to resolve their salary issue.

Although the government is claiming that they are working for the betterment of poor and empowering women, unfortunately their commitments do not seem legit anymore. How long will medical professionals – like medical university teachers and lady health workers – suffer like this? No one seems to have the answer.