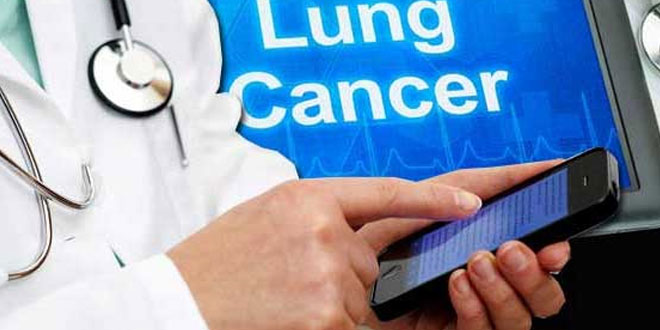 A new mobile application could help doctors better provide care to patients with advanced lung cancer, perhaps even extending life expectancy, according to a study presented in the United States.

The app, named Moovcare, enables patient-doctor communication even at a distance, using remote monitoring to quickly detect relapses or complications.

“This approach introduces a new era of follow-up in which patients can give and receive continuous feedback between visits,” said lead author Dr Fabrice Denis, a cancer researcher in Le Mans, France.

Study participants who used the app reported an improved quality of life and on average survived 19 months, seven months longer than the control group that received standard medical care.

“With new technologies like this app, we can make communication even simpler, which is great for doctors and even better for patients,” said Gregory Masters, a lung cancer expert who did not work on the study.

Developed by Denis, a lung cancer specialist, the app is still at prototype stage, but the Israeli firm Sivan Innovation plans to roll it out commercially in 2017 at a price yet to be determined.

Sivan Innovation and the Cancer Institute of Western France co-funded the study whose results were presented the annual American Society of Clinical Oncology (ASCO) conference.

Patients who used the app had the same medical visiting schedule – doctor visits and CT scans every three to six months – but used the app to assess their own symptoms weekly.

If the app detected specific changes in any of a dozen symptoms, doctors received alerts to adapt treatment accordingly.

One year after the study began, 75% of patients using the app were still alive, in contrast to 49% in the control group.

Relapse rates in both groups hovered around 50%, but 74% of those using the app were strong enough to continue treatment following relapse. Just one-third in the control group were considered healthy enough for more procedures.

Doctors did note that while corresponding with patients via the app did not significantly add time to their work weeks, the app could burden medical facilities with additional costs, if nurses or other staff must also help monitor patients who were using it.

An estimated 224,000 people will receive a lung cancer diagnosis in the United States alone this year.

It is the most common cancer worldwide, with 1.8 million new diagnoses and 1.59 million deaths in 2012, according to statistics cited by ASCO.