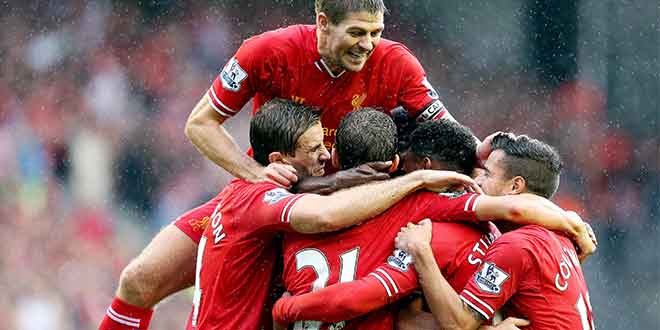 Liverpool Football Club has secured their position in the semi-finals of the FA Cup courtesy of a brilliant goal from their talisman Phillipe Coutinho.

This was like a replay of the quarter-final as Blackburn Rovers drew at Anfield last month. Liverpool being far from their best registered a win in the 70th minute when Brazilian Phillipe Coutinho exchanged a few passes in the final third with Vice-captain Jordan Henderson and then drilled in a shot to score. It was a sigh of relief for the Merseyside supporters.

This will be a boost for Brendon Rodgers and his side after being defeated heavily at the Emirates by Arsenal Football Club. Liverpool now faces Aston Villa in the semi-finals of the FA Cup.

FC Barcelona scored four past Almeria at the Camp Nou. Lionel Messi opened the scoring with a sublime finish from his lethal left foot from the edge of penalty area in the 33rd minute. Former Liverpool striker Luis Suarez scored the first of his two goals in the 55th minute.

Marc Bartra further increased Barca’s lead by scoring a close-range header. Luis Suarez scored another in stoppage time to make it a convincing Barca win at the Camp Nou. Luis Enrique’s side has won 20 out of their last 21 games in all competitions edging Real Madrid by four points in the La Liga standings.

Cristiano Ronaldo and company beat Real Vallecano 2-0 to keep the title race alive. Cristiano Ronaldo took his tally to 300 goals in 288 games for the Spanish club, making him only the third player after Raul (323) and Alfredo Di Stefano (307) to score 300 goals for the club. He is also the leading goal scorer in La Liga with a staggering 37 goals to his name.

The Portuguese opened the scoring for Real Madrid courtesy of a header, assist was provided by Dani Carvajal from the right-wing. James Rodriguez doubled Real’s advantage by scoring on a cool curling finish to make it 2-0 to Carlo Ancelotti’s side.