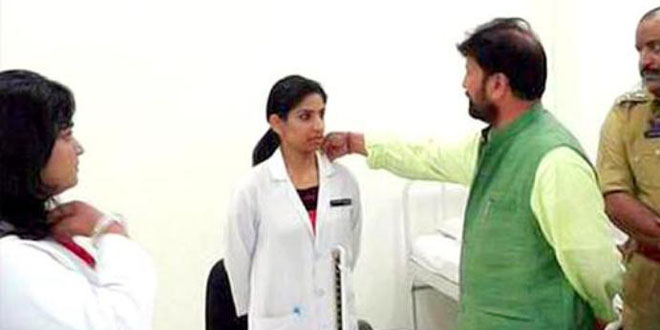 Harassed and assaulted: Life of a female doctor in Pakistan

The beginning of the industrial revolution in Europe also marked the beginning of a female workforce – where women first began to work outside and take on responsibilities beyond the household. And similarly, it also resulted in the concept of sexual harassment at work place, which began to occur at a ridiculously high scale.

Sadly, the nature of man hasn’t changed much since then, and even today, in the 21st century, we come across horrifying cases of sexual harassment at workplaces. Be it Wall Street in the US, a textile factory in India, a coffee-manufacturing plant in Mexico or our very own I.I. Chundrigar Road, such harassment cases are abound.

This is why, when I first came across the news about how a minister in Indian-occupied Kashmir (IoK) harassed a female doctor while inspecting a hospital, in front of everyone, I was not surprised.

Lal Singh, who is the current health minister in IoK, while visiting a hospital in Lakhanpur, tried to ‘adjust’ a female doctor’s lab coat and inappropriately touched her. The picture of this incident has gone viral on social media and the minister has received much criticism for it. However, no official complaint has been registered against him thus far.

While reading about him, I also got to know that he isn’t the only Indian health minister who has a sleazy character.

The previous health minister of IoK and Congress leader, Shabbir Ahmed Khan, was also accused of harassment by a female doctor and a case was filed against him. The woman called him a ‘sexual predator’ who tried to molest her. The case is still under trail.

Sadly, such incidences are not rare in the subcontinent region. Women, especially those in the medical profession, come across such advances very frequently and, unfortunately, many do not raise their voices against it – which leads to such activities becoming a norm.

Pakistan is no different.

There have been many cases where male doctors have assaulted and harassed female doctors, nurses, maids and even patients. And not every victim is able to take a stand against it. Some strong women might press charges or file FIRs against these uncouth and unruly doctors, but there is still a great silent majority which stays quiet and turns a blind eye to such atrocities out of fear of being judged and stigmatized.

Because let’s be honest about it – the medical profession in Pakistan is a man’s world.

You don’t agree with me?

Well, here is an example.

A few years ago, a nurse was raped and thrown off the building at Jinnah Hospital, Karachi. Till date, no one knows who attacked her, no one knows where the predator is now and, obviously, no one knows how many other nurses have been victimized by that monster. And, perhaps, no one cares. The victim was ‘just a nurse’ anyway, right?

On a positive note, Pakistan is still behind in such cases as compared to other countries. But one cannot be sure about the shadow gap that exists between what is reported and what actually happens. Many female doctors are still unaware of what qualifies as physical or sexual assault. Many cases of assault often go unreported as women fear the backlash they might get from the police, lawmakers, their institutions and families. Not only that, they are afraid of losing their jobs and being banned from even getting out for work by their families.

Although now families support their daughters to stand up for themselves in Pakistan, some people from lower socioeconomic areas are hesitant to go to court or discuss something so explicit in public. Hence, women end up getting physically, mentally and emotionally violated, without being able to voice their woes.

These trends of ‘stay-quite’ and ‘keep-it-in’ need to change. If someone disrespects you, or behaves inappropriately, then it is your right to complain to the authorities. If the administration of your institute takes no action against the violator and compromises on your safety, then is that institute really worth working for?

It is about time women speak up and be brave. Only then will society learn to respect them and give them what you deserve. Women in the medical field are professionals; they need to learn to use their education for their own good. If our healthcare workers are unsafe and not able to work with a peace of mind, will they really be able to provide us the care and quality that we ask for? If the female doctor your wife goes to is being molested and is afraid, will she ever be able to give your wife the treatment she deserves?

As a society we need to think about these things.

As a man with power, you need to delve into such issues and try to solve them.

As a mother, you need to teach your son to respect other women.

As a father, you need to tell your daughter to be brave and strong.

It’s not about a woman in Jammu or a nurse in Jinnah. It’s about all those women who go to work every day to help others but instead end up feeling helpless themselves.