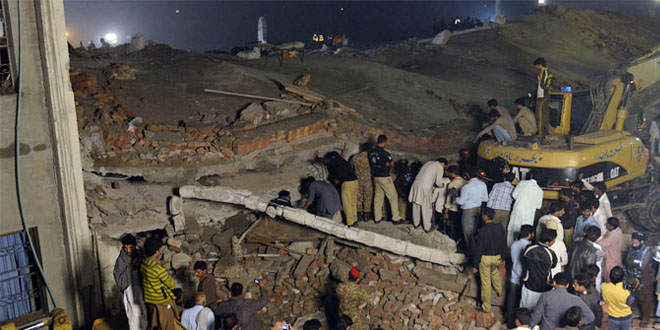 Soldiers and rescuers in Lahore were carefully cutting through steel and using cranes to lift the debris of the building in a bid to find people still alive, with survivors telling AFP that many of the workers had been children at the Lahore factory collapse.

Medics had to amputate one man’s leg on the site before rushing him to hospital.

“One of his legs was trapped in such a way that it was not possible to retrieve him with both legs,” an official who did not want to be named told AFP. “We had no other option.”

One worker still trapped in the rubble told SAMAA TV early Thursday that he is pinned under a girder, but alive and feeling thirsty.

Families on the scene were struggling to reach the site, crying and at times scuffling with police and soldiers holding them back. “I have to go there, even if they are going to shoot me,” one elderly man said.

It was unclear how many people were in the building when it collapsed or how many — dead or alive — may still be trapped. Officials have put the total number of those involved at around 150-200.

Rescue services spokesman Jam Sajjad Hussain said Thursday it was “difficult” to give a specific number, but said workers had told officials that around 200 people had been inside at the time of the collapse, including the owner, though that was unconfirmed.

“Rescue work is ongoing and I fear that the death toll may increase,” he said.

Factory employee Mohammad Navid told AFP Thursday that dozens of shift workers may have been sleeping in a part of the building that rescuers had not yet reached, and that children as young as 12 had been working in the factory.

Another employee, 18-year-old Mohammad Irfan, told AFP from his hospital bed that the workers were “mostly” were aged between 14 and 25.

Chief doctor Zia Ullah at Jinnah Hospital, where some survivors were taken, said Wednesday that the majority of the victims were young workers, with many suffering head injuries and fractured limbs.

Mohammad Usman, the top administration official in Lahore who is coordinating the response to the disaster, said Thursday that 102 people had been rescued, and that the focus of the operation remained the search for survivors.

Rescuers were using audio and video technology as they searched, he said. Cranes and machinery provided by the army were also being used.

The factory may have suffered structural damage in the October 26 quake which killed almost 400 people across Pakistan and Afghanistan, Punjab chief minister Shahbaz Sharif said.

“I have heard about the earthquake affecting the building, but according to labourers the owner continued to build an extension,” he told reporters.

“Some of the pillars of the building had been weakened in the earthquake,” 22-year-old Navid told AFP, adding that workers had informed the owner of the problems.

“The building caved in with a big bang and I fell unconscious on the ground,” he said, adding that he had regained consciousness after some 15 minutes.

“I heard people screaming and shouting for help.”

Pakistan has a poor safety record in the construction and maintenance of buildings.

A judicial probe into the blaze was damning, pointing to a lack of emergency exits, poor safety training of workers, the packing in of machinery and the failure of government inspectors to spot any of these faults.

A murder case was registered against the factory owners, but it has never come to trial.