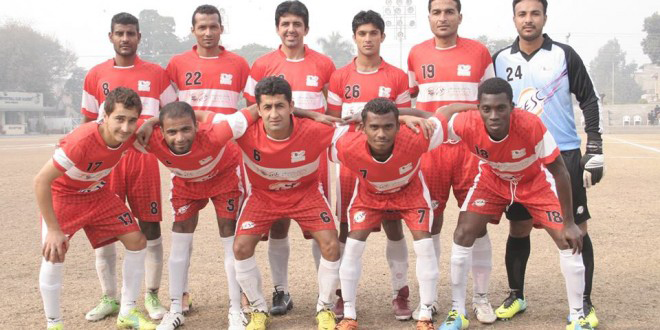 K-Electric qualifies for the next stage of AFC Cup

Karachi based football club K-Electric (KE) has qualified for the next stage – the playoffs – of Asia’s second tier competition. This triumph makes Majid Shafiq’s side the first Pakistan-based club to qualify for the playoff stage of the competition.

K-Electric needed a draw between Duruk United and Khoromkhon FC to qualify. The duel between the clubs ended with 0-0 score-line, resulting in the company topping their group with four points.

The Pakistan Premier Football League (PPFL) Champions started their campaign with a 3-3 draw against Bhutanese champions Druk United at the Changlimithang Stadium, Thimpu on Tuesday. Slipping a 2-1 and going 3-2 down, Habib salvaged a point for his side to earn K-Electric a valuable point, when he scored four minutes from time. Mohammad Rasool scored a brace for the Pakistan-based club, whilst Druk United’s Tshering Droji scored two and a single goal from Tshering Wangdi was scored.

In the second game, Nigeria-based striker Oludeyi Abayomi scored the only goal which proved to be a decider between K-Electric and Khoromkhon FC. Former Bolton Wanderers player, Jay Jay Okocha, who is working as Abayomi’s agent, also praised the striker’s influence on the game. He added that,

“His goal shows how important he is for K-Electric and even though he didn’t play from the start, but was eager to make a statement in their win.”

Abayomi, who helped K-Electric secure the PPFL title last season, was greatly pleased on the victory in the second game. His remarks showed how important that goal was for him and his team corresponding to the importance of qualifying for the playoffs of Asia’s second-tier competition – the AFC Cup.