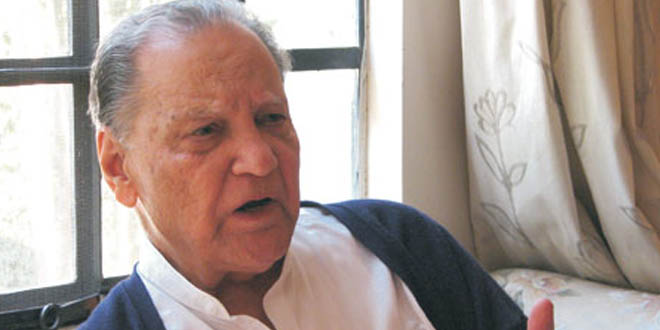 Retired justice Javed Iqbal, son of celebrated poet and philosopher Allama Iqbal, passed away at the age of 91 in Lahore on Saturday morning from a prolonged illness.

Mr Javed, suffering from cancer, was receiving treatment at Shaukat Khanum Hospital, according to sources from the family.

Born on October 5th, 1924, the former justice served as the chief justice of the Lahore High Court as well as the Supreme Court of Pakistan. He published many papers on Islamic political thought, the philosophy of Iqbal and the political ideological framework of Pakistan.

Twice, during the early 60s and in 1977, Mr Javed served as the delegate of Pakistan to the United Nations General Assembly. Alongside this, the veteran judge has argued extensively in favor of reforms in the Hudood laws of Pakistan.

Mr Javed, who retired from the Supreme Court in 2011, was appointed chairman of the judicial commission ordered to “trace missing person.” While in service, he was hearing cases of missing persons and “had succeeded in getting intelligence agencies to answer questions about the people in their custody”.

Mr Javed completed a BA (Hon.) degree in 1944 from Government College, Lahore, a double-MA in English and Philosophy (Gold Medalist) in 1948, Punjab. He further completed his PhD in Philosophy in 1954 from the University of Cambridge, UK, and also achieved a Barrister-at-Law, Lincoln’s Inn, London, in 1956. Along with these, he has also received honorary doctorates from Villanova University, USA, and Selcuk University.

People around the nation, including Imran Khan and the PM, are grieving and have offered their condolences. People took to Twitter to show their grief at the loss of such a renowned personality and a phenomenal mind.

Grieved to learn of the passing of Dr Javed Iqbal, a jurist, scholar & philosopher. His death is a great loss for Pakistan.

Allama's Iqbal's Son, Justice Retd. Javed Iqbal passes away at the age of 91 leaving behind legacy of knowledge on philosophy and law.

Lahore justice retd javed iqbal has passed away and his funeral prayers will be offered at 4pm today in Gulberg area pic.twitter.com/EoHkOwCN1q

Extremely saddened by the news of the demise of Justice (r) Javed Iqbal, son of Allama Mohammad Iqbal. May his soul rest in peace…!!

Deeply saddened by the sad demise of Justice (R) Javed Iqbal. He was an eminent legal mind with great services and contribution 1/2

While he is survived by his two sons, Waleed and Munib Iqbal and wife Justice (retd) Nasira Iqbal, his funeral prayers will be offered at 4pm today in Lahore.