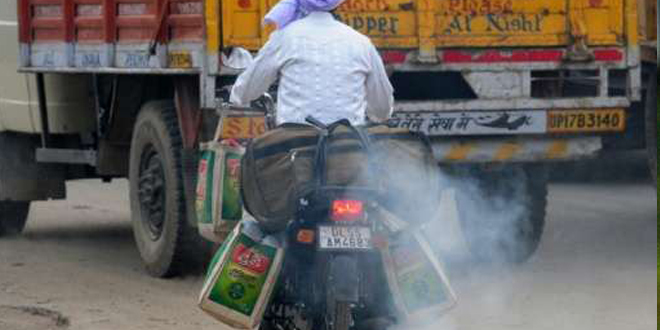 New Delhi has failed to collect a new “pollution toll” from trucks entering the city, officials said Monday, just one day after the levy was introduced to improve air quality in the choked city.

India’s top court last month approved a four-month trial plan to charge light commercial vehicles an extra 700 rupees ($11) and 1,300 rupees for large trucks entering Delhi, blamed for much of the filthy air in the world’s most polluted city.

But private contractors collecting existing tolls for the city refused to enforce the Supreme Court’s directive from November 1, citing a lack of clear instructions from Delhi authorities.

“We didn’t collect any extra ‘green tax’ last night. There is still so much confusion — no proper communication, no trained staff, no instructions about monthly passes,” a toll official told AFP on condition of anonymity.

Trucks have long been banned from entering the city during the day, but every night after 8:00 pm about 52,000 pour in, according to the Delhi-based Centre for Science and Environment (CSE).

The independent centre says lorries account for nearly a third of the pollution in Delhi, adding to a toxic mix of industrial fumes and dust from construction sites to produce hazardous levels of smog.

Many of the trucks drive through the capital at night to avoid paying tolls outside the city, which is ranked as having the world’s worst air quality by the World Health Organization.

“This is contempt of court,” Sunita Narain, head of CSE, told the NDTV news network.

“The cess is being imposed only because of the pollution in Delhi.”

Delhi was covered in smog on Monday, blamed on farmers in neighbouring states burning stubble in their fields after the harvest.

The Delhi government-appointed contractor SMYR Consortium LLP said it wouldn’t collect the toll because it lacked manpower and software.

“We couldn’t initiate the collection process and it might not be possible in future either,” Kishore Agrawal, a partner of SMYR, told the Hindustan Times newspaper.

Among the issues, officials worried over security — a common concern for collectors in India where they are often roughed up by angry motorists who refuse to pay.

SMYR went to court last month complaining that the new toll will lead to traffic snarls and losses since it may encourage drivers to use alternative routes.

Stakeholders are scheduled to meet on Wednesday to work out a solution, before a Supreme Court hearing on November 16.