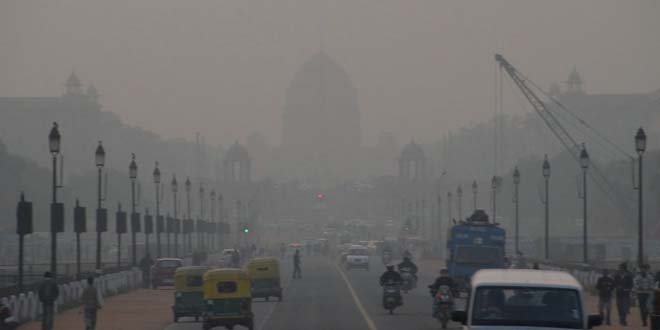 Environmentalists called Tuesday for a pollution tax in the Indian capital after a top court ordered the city and national governments to quickly come up with a plan to clean New Delhi’s notoriously filthy air.

The Delhi government has long been criticised for failing to curb pollution from industries and mounting traffic, in a city ranked by the WHO as having the worst air quality in the world.

Acting on a petition from a lawyer, the Supreme Court on Monday ordered the Delhi and national governments to submit a plan within three days on clearing the city’s air before winter starts, when quality deteriorates.

Delhi’s Centre for Science and Environment (CSE) said thousands of diesel trucks pouring into the city every night account for nearly one third of the area’s total pollution levels.

The research body called for a tax on these 52,000 commercial vehicles, many of which only enter the city, en route to another state, because of a lack of bypasses on India’s broken highways.

“Travel through Delhi needs to be charged so that there is a clear disincentive for the use of these roads,” Anumita Roychowdhury, CSE’s executive director, said in a statement.

Harish Salve, the lawyer who filed the petition, said many of the trucks also only drove through Delhi to avoid paying tolls outside the city.

“This is a serious issue. We will take up this matter on Thursday. We want a positive response,” Chief Justice H.L.Dattu reportedly told the court on Monday.

These extremely fine particles of less than 2.5 micrometres in diameter are linked to increased rates of chronic bronchitis, lung cancer and heart disease as they penetrate deep into the lungs and can pass into the bloodstream.

India’s environment court earlier this year ordered a ban on diesel vehicles older than 10 years in Delhi, but the embargo has not yet been introduced.