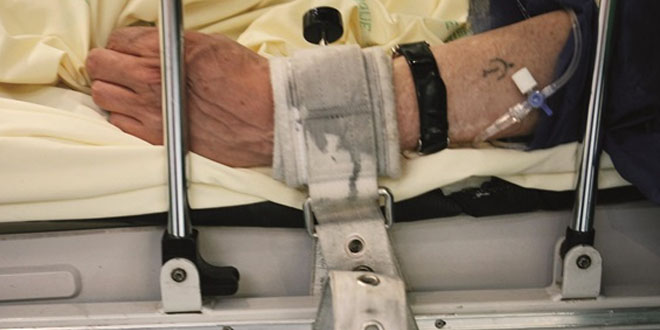 How to handle aggressive patients

A situation which I encountered during my clinical rotations has encouraged me to write about my feelings and perception regarding aggression.

A young 17-year-old male was admitted with complaints of aggression, violent and disinhibited behavior. I had observed that he was continually abusing and violating other staff members and patients. As such, I decided to take a detailed interview of the patient.

The interview revealed that the patient belonged to a poor family. In further inquiry, I found out that the patient belonged to a joint-family and because of the large size of his family, the patient suffered from negligence, triggering the aggression in him as he verbalized feelings of hate towards his family. Moreover he expressed that he left his school in middle standard due to similar behavioral problems. The patient sounded confused, agitated, irritable and anxious. The extreme nature of his aggressive behavior once resulted in an attack on his father and brother without any significant cause.

Human behavior and development is a well-known concept of the behavioral psychology. Individuals behave and respond in different ways to various stimuli. Aggression is one of the emotions which is considered unacceptable in the society. In a country like Pakistan, the concept of aggression is important to discuss because people have poor awareness towards the concepts and environmental influences related to aggression.

According to a study conducted by Khalily, 2011, “There has been an increase in violence over the past five years in Pakistan, such as suicide attacks, explosions, and even safety precaution…” The individual who expresses aggressive behavior requires a holistic care, therefore the aim of this paper is to focus on the various factors, impacts and management of aggressive behavior.

Firstly, there are many factors responsible for anomaly in aggressive patients but here we will focus on only a few important and relevant factors related to the given scenario. In the above scenario, the patient was neglected since childhood leading to poor parent-child relationship. Good parenting is very important for better child development. Fatima and Sheikh (2009) believe that children of caring and affectionate parents are less involved in aggressive activities. Another important factor of aggression was covered by psychoanalytical theory which was given by Freud.

According to Boyd (2005), “Freud explained aggressive or violent behavior as a combination of instinctual impulses and events in the environment that stimulate release of the instinctual urge.” Similarly in above the scenario, the provoking environment of the hospital and the patient’s low self-esteem makes him vulnerable and aggressive to others. In addition to the hospital environment, patient cognition and staff communication may also contribute to provoke the aggressive behavior.

These constructs are well defined in the model of In-patient aggression cited by Stuart (2009). By integrating this model we can visualize that the patient’s hospital environment is less interesting and secluded. Improper seclusion and restraint leads the patient towards extreme stress. Moreover, interpersonal staff-patient communication was also ineffective that altogether makes the patient aggressive.

Secondly, it is equally important to discuss the impacts of aggression on individual life and mental well-being. The people who tend to express aggressive behavior have developed an intolerant attitude towards the environment which makes an individual unable to concentrate on daily life activities. Many times, people may become agitated, irritable and develop decrease positivity towards life. Such people may also use substance abuse and get involved in criminal activities to satisfy their low self-esteem, guilt and anger. Many symptoms are clearly present in the above patient, as he revealed to me that he is using substances if abuse to satisfy his anger.

Moreover, social stigma also negatively influences on individual psychological health. Aggression not only impacts on individual life but may disturb the environmental peace as well. In my clinical rotations, every other staff member and patient was sacred of his violent behavior. Thus, it is very useful that health workers have knowledge about these impacts so that appropriate management can be possible.

Finally, the entire goal of aggression management is to enable patients to control their aggressive behavior by making them empowered. According to the Assault and Violence assessment tool as suggested by Stuart (2009), this patient’s score was 11 out of 16 making him fall into the high risk category. Using this assessment, multiple interventions could be planned.

Firstly for the purpose of awareness, I gave a paper to the patient to record his behavior.This paper helped the patient to record the counselling which I delivered to him. I taught him limit setting techniques, diversion, coping strategies and communication in an assertive way. During evaluation, patient’s response was positive for a long time period. The other individual based intervention includes seclusion and de-escalation. Seclusion is a strategy in which a patient is temporarily confined to the room with closed monitoring whereas as described by Stubbs and Dickens (2008). De-escalation is a communication to the aggressive patient in a smooth way to prevent violence.

If, individual strategies are not adequate to manage the aggression of a patient, group and institution strategies should be applied simultaneously. At the group level, family should be included as part of treatment. In my patient, parent-child relationship was not effective therefore parent management training would be effective in that case. As Pearl (2009) observed,  “Parent management training (PMT) refers to treatment procedures in which parents are trained to alter their child’s behavior at home.” Institutional interventions includes staff training program, safe environment etc. Unlike the nursing staff, other health workers are rarely aware about psychology of behaviors thus sessions that ensure safe and effective delivery of care make environment and staff empowered.

Before encountering this patient, I considered these patients as difficult or dangerous individuals and thus I was sacred to talk to them or get involved with them. But this patient proved my assumption wrong and helped me see beyond my presumptions. Furthermore, writing this paper helped me engage myself with a patient in terms of different factors, impacts and interventions.

To conclude this paper, I would like to summarize that aggression is a broad phenomenon which requires long term care and attention. One should understand that aggression affects the holistic life of an individual, family and community. Therefore, health workers should be aware about underlying causes, symptoms and management of these patients at various levels. It is also recommended that pharmacological treatment and restraining the patients are not the only treatments, and other interventions should be considered in order to enable the patient to exercise control over the internal and external stimuli of the environment.

About the author: Shahzad Kanji is working as Assistant Head nurse at PW2 dept. at AKUH, Karachi, Pakistan. His professional responsibilities include patient care and monitoring administrative issues. He did his Post RN BscN Program from Aga Khan University School of Nursing and Midwifery, Pakistan.