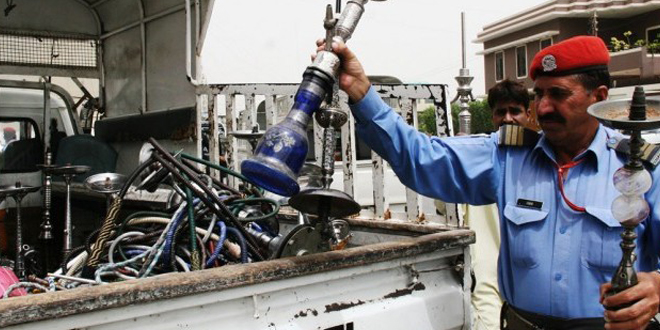 Here is why you should stop smoking shisha

Effective means of smoking are readily available in Pakistan – there is no denying that. Whether it is shisha, cigarettes or other tobacco products, we have it all. And as a result, an unusually high number of people are falling prey to tobacco addiction in the country.

However, it is the youngsters that I am really concerned about, since they are more susceptible to this than adults. Smoking shisha has become a fad amongst them and most of them are being plunged into this deadly trend just to look cool.

Even public opinions needs to be rectified. Many people consider shisha to be less harmful than cigarettes, but that is not the case.

According to a recent research, shisha has been termed a far more dangerous substance than cigarettes or other tobacco products.

Shisha has drastically become a part of our daily lives, and there seems to be no stopping it. In order to attract more people and conceal its negative effects under a facade, shisha boasts natural flavors such as lemon, orange, apple, melon and the likes.

But believe me when I say this: there’s nothing healthy or natural about a shisha. Its smoke cause inescapable damage and its ingredients are harmful for our body.

Here are a few reasons why you should stop smoking shisha:

First of all, the substantial range of tobacco that is taken in through the pipe of a shisha by the smoker is almost 200 times more than that of consuming cigarette. Shisha smokers inhale more amount of tobacco smoke due to the larger volume of smoke they are inhaling in just one puff.

In fact, people who smoke shisha are more vulnerable to carbon monoxide than those who smoke cigarettes.

Possible cause of other diseases

When multiple people smoke from the same filter pipe, it can lead to a high risk of transmission of deadly germs. This can further lead to people contracting diseases like hepatitis, tuberculosis, meningitis and other infectious viruses.

People around the world are putting a ban on smoking shisha and demanding an instant ban too as the results of inhaling stocks of tobacco are devastating.

Governments around the world are taking actions against this deadly addiction. Brazil, for example, has banned shisha flavors; Turkey has included ‘water pipes’ in the warning labels of cigarette packets and the likes. Water pipes are banned in Sharjah, UAE and they were even awarded for this by the WHO.

Pakistan itself has essentially put a ban on shisha cafes, but they are still operating. It seems Lahore has taken a bigger stance on it than Karachi, because it is much harder to find one there. In Karachi, there are cafes in just about every commercial area.

It’s time to make a difference and accept the reality that we should stop ‘smoking’ altogether because whether you smoke cigarettes or shisha, they are both harmful to your health.

health risk by sheehsasheesha body disadvantagessheesha dangerous than smokingsheesha hazards on healthsheesha health side effects
Comments
Loading...
Stay With Us