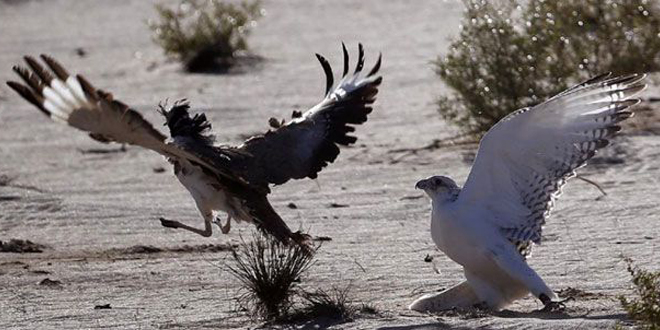 Pakistan on Thursday asked the Supreme Court to review its ban against hunting a rare desert bird whose meat is prized among Arab sheikhs as an aphrodisiac, saying controlled hunting could be a tool for preservation.

Wealthy hunting parties from the Gulf travel to Pakistan’s southwestern Baluchistan province every winter to kill the houbara bustard using hunting falcons, a practice that has sparked controversy in recent years because of the bird’s dwindling numbers.

The issue has also cast a spotlight on traditionally close ties between Pakistan and its allies in the Arab world, particularly Saudi Arabia.

In August the Supreme Court banned hunting of the houbara bustard in a decision welcomed by wildlife campaigners.

But the federal and provincial governments asked the court to review the decision, with the deputy attorney general Amir Rehman arguing Thursday that controlled hunting “is a tool for preservation so it should be allowed”.

He also said the court had not considered scientific evidence presented by the government, nor had it taken into account provincial laws allowing for the hunting of the houbara bustard.

However panel member Qazi Faez Isa said the government move would “hasten” the demise of the bird, adding: “You want to reduce Pakistan to a desert.”

“Can’t they do it in their own country?” he asked, referring to the Arab sheikhs and their annual hunting trip to Pakistan.

The court adjourned the hearing for three weeks and asked Rehman to bring more data about the population of the bird and preservation efforts.

The International Union for Conservation of Nature includes the bird on its “red list” of threatened species, estimating there are fewer than 97,000 left globally.

A provincial High Court in Baluchistan in November last year cancelled all permits for hunting in the province, but the federal government headed by Prime Minister Nawaz Sharif — a close ally of Saudi Arabia — continued to issue licenses.