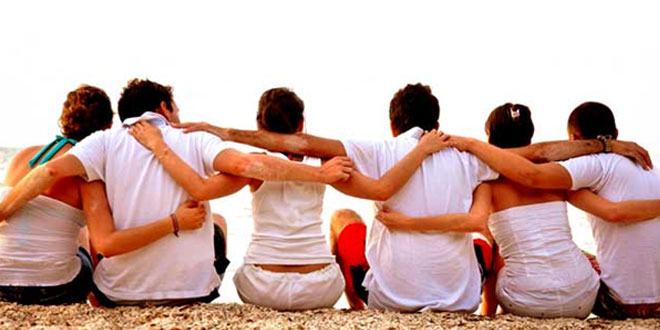 A new UK study has found that people with large groups of friends also have a higher pain tolerance.

The study, by a team of researchers from Oxford University, focused their research on the brain chemical endorphin.

Responsible for the euphoric “runner’s high” after exercise, a rush of endorphins not only makes us feel good but also acts as a pain reliever even stronger than morphine.

Previous studies have also suggested that endorphins can help build social bonds, with Katerina Johnson, one of the study’s authors, explaining that it could be endorphins that give us “the feel-good factor” when we see our friends.

To test the theory, the team used the known pain-relieving effect of endorphins and participant’s tolerance to pain as a way of measuring endorphin activity in the brain. If endorphins really did help these social bonds, then those with more friends would also have a higher pain threshold.

The team recruited 101 healthy young adults aged 18 to 34 and asked them to complete a questionnaire on their social networks. They were asked about friends who they contacted at least once a week, and those who they contacted less frequently, around once a month.

Pain tolerance was then assessed using the wall sit test. Participants had to squat with a straight back against a wall with knees at a 90° angle and hold the pose — and endure the discomfort — for as long as possible.

The team found that those with larger social networks had a higher threshold to pain.

Researchers also found that participants who were fitter and had higher reported stress levels tended to have smaller social networks, which Johnson believes could be down to time — a busy, stressful lifestyle or time spent exercising can mean less time for friends. The team suggested that instead of focusing only on exercise to treat illnesses such as depression, advice should also be given on how to strengthen and expand social circles for an endorphin boost.

Johnson also commented that as our social relationships can affect both physical and mental health, understanding social networks better is an important research topic.

“Sociality is clearly of adaptive value to our species,” said Johnson, “yet in this digital era deficiencies in our social interactions may be one of the overlooked factors contributing to the declining health of our modern society.”

The study was published in the journal Scientific Reports.

7 Things We Learned From Friends